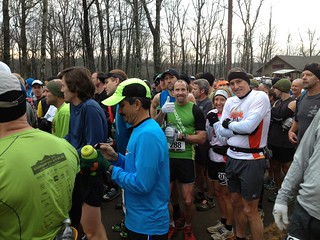 A number of my age-peer (Grand Master) competitive athletic friends often lament: “The older I get, the faster I was.” While some have kept meticulous records of their accomplishments, others have neglected documentation entirely. For those in the latter category, there is now the internet so virtually anyone can dig up old race results and see just how fast or slow we really were, regardless of what we recall (accurately or not). As luck would have it, I kept a log 11 years ago when I first ran this race. My first 50K.

Shortly before this year’s race, I took a nostalgic look back to see how I fared and was pleasantly surprised. I also noted a number of my contemporary peers (against whom I would be racing again this year) had finished much earlier. I also wrote in my notes that it was a difficult course strewn with sharp angular rocks, a couple of VERY steep climbs, slippery roots and very sticky mud.

Racers were greeted race morning with an appropriately cold mist but welcoming warm lodge swarming with volunteers and pensive runners going through their gear lists and restroom visits. The lodge is a significant upgrade from the fire pit everyone huddled around when I was last here. The beautiful setting and view from the lodge would not however become evident until much later in the day.

The race starts at the lodge and it’s important that you take advantage of this early road portion to accurately seat yourself in the conga line before you hit the trailhead. I could only recall bits and pieces of the course but I did recall that once on trail it was very tight for some time and passing was not easy. In usual fashion I was quick to place myself with runners who also overestimated their ability and we all suffered together until the trail opened up and everyone settled into a more natural rhythm.

This rhythm, however, was quickly shattered when the first water stop came into focus. Within a short distance of the table, my once pleasant running companions quickly felt the need to swarm it in a feeding frenzy. I was literally knocked to the side by one and had to forcibly elbow (to keep from being knocked down) another who crossed directly into me. Rather then stop as I had planned I grabbed a GU and headed on down the trail, alone.

And alone I stayed, for the balance of the race apart from an occasional pass of a slowed runner or being passed by a faster one. Bits and pieces of the course came flooding back as the day wore on. The miserably sticky mud at the power line was one of the first recollections, as was the endless array of irregular and sharp rocks. The water line loomed ahead and I was soon mentally counting the miles before I would hit it. 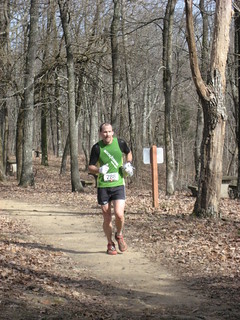 The aid stations occur at near perfect intervals, are well stocked, had terrific volunteers and were equipped with a timing mat to record the crossing of the chip attached to your shoe. I image that beyond the post race value to the runners this would make finding those who were lost easier to find. Although I can’t imagine getting lost as the trail was (for me at least) very well marked. That said, there as a number of sections that there is no real trail but rather a wash or barren patch to follow.

The “water line” section of the trail is typically where the wheat gets separated from the chaff, and once there I remembered why. It’s a very long steady uphill slog until you eventually reach a nearly vertical section for rock face that you literally climb by grabbing the rocks and roots with your hands to avoid falling backward which you definitely don’t want to do. Apart from the fact you would be seriously injured in said fall, you really don’t want to have to climb this section more than once.

Oddly enough, it was in the long slog section that the runner in front of me got on his smart phone (because I could not provide the data) to review the course profile, mileage in and how close we were to the next aid station. I was going to ask if he was going to update his Facebook profile at the same time but was too out of breath to ask. Earphones were (thankfully) prohibited but I guess there are some who still need a digital connection during a trail race. Go figure.

At the top of this climb you encounter the second-to-last aid station and are soon on an equally steep, muddy and slippery downhill section. The angle of descent would be terrifying if strapped into a roller coaster, let alone on wobbly legs filled with lactic acid from the previous miles. The fall to the valley floor seems to last a very long time before you once again begin a long climb up to the ridge and the final stint on fairly level ground to the finish.

You can hear the finish area well before you get there, which either really motivates you to pick up the pace or is totally demoralizing because your legs and lungs stopped when you hear that noise initially. I experienced a bit of both.

Once finally across I was greeted with a band of volunteers who kept me upright and removed the chip from my shoe. (My sincerest apologies to the person I leaned on during this process. I hope your back recovers soon) There was plenty of post race food, snacks and drinks in the lodge and as a real bonus all racers received tacos from a food truck parked next to the lodge. Without a doubt, the tacos were worth the race entry fee. The pony keg of craft beer was the closing chapter on that delicious meal.

As a fit (albeit inexperienced) racer 11 years ago I ran this race under similar if not identical (as I recall) conditions in 5:11 and was 23rd Overall. This year I ran it in 5:15 and was 24th Overall (1st Overall Grand Master’s Division). While not ever being considered a fast overall competitor; I am very pleased that I have been able to be that consistent over the span of that many years. I can now verifiably say that while I may not be quite as fast as I was; I have not slowed that much either.