Now that everyone is back home, presumably has had some sleep and is beginning to recover from the Rock/Creek StumpJump 50k, we caught up via email with David Riddle to ask some questions about his historic run. He was gracious enough to answer them, in detail, and here’s what he had to say! ~ Jeff

R/C: It looked like you were having a blast out there, start to finish… that big fist-pump and leap as you came down the home stretch had everyone cheering. It’s fun to watch. What’s your secret? 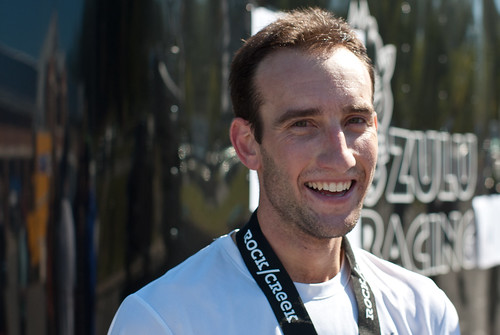 David: My secret is… there is no secret. When you’re able to win a race and set the course record, it always feels good. You don’t have to squeeze every last ounce of effort out of yourself.

I intentionally backed off a little the last few miles to make sure I could enjoy the run into the finish. The crowd support at the end was amazing — the best I’ve ever experienced at a 50k trail race. I just fed off the crowd’s energy and tried to share my excitement with them.

R/C: You came through the Indian Rockhouse for the first time at 9:17, just ahead of the pack, but really pulled away from the competition on that loop and came back through at 10:31 or so. That’s a pace that would be podium-worthy at our River Gorge race, which uses the same loop… did you have a target pace for that section of the course, or were you just taking what your legs were giving?

David: Going into the race, I had mentally divided the course into three sections with Indian Rock House being the logical dividing point since we pass through twice and it splits the trail into sections of relatively equal length. My aim was to stay relaxed on the first section, work into a nice rhythm on the second part, and then see what I had left on the big climbs to the finish. Because I had never seen the course, I focused on keeping the effort very controlled on the first section to Indian Rock House. I really wasn’t too concerned with my position or pace at that point.

I used Josh Wheeler’s race report from last year’s race to set some rough time estimates for each section, but when Josh and I came through the Suck Creek Aid Station 6 minutes off his pace from last year, I didn’t panic. I continued to stay very relaxed on the climb up from Suck Creek Rd, but gradually pulled away from him. By the time I arrived at Rock House for the first time, I was only a minute or two off Josh’s split from last year. That got me really excited because I knew how little I had pushed myself and I still made up a bunch of time. So then I started to roll. I had been told the loop portion of the course was the most runnable and that’s where I would need to push the pace. I knew the legs were feeling really good, I was enjoying the trail, and I started dropping some sub 7 min miles. Again, I had a guess at what I should run on the loop, but I had no clue how hard the infamous Rock Garden would be or how much it would slow me down. So really it just came down to running on feel.

When I came into Indian Rock House for the second time at 2:30 or so, I started to get really excited. I new I was on record pace, the crowd was loud, and I was passing runners coming through for the first time. So I came flying through the aid station. (In restrospect, I came through way too fast and apologize if I scared anyone). Shortly thereafter the excitement and pace caught up to me a little bit and I had my only little down time of the day. But I got it back together on the descent down to Suck Creek.

R/C: I read in the Times-Free Press that you struggled on the climb back out of Suck Creek. What’s “struggling” for David Riddle?

David: To say I struggled on the climb back to the finish may be a bit of an overstatement, but did have to walk some of the steeper sections of trail. I felt like I had slowed down quite a bit, but looking at my splits now, I was only 2-3 minutes slower than my split on the same section going the other way, which of course is a net downhill. I surprised the heck out of the aid station at Mushroom Rock (26.8mi). They said they weren’t expecting anyone for another 30 minutes and I had to wait on them to open the bag of cups and pour me some coke. The last four miles were almost entirely runnable and I was pretty sure I was looking at a great time. 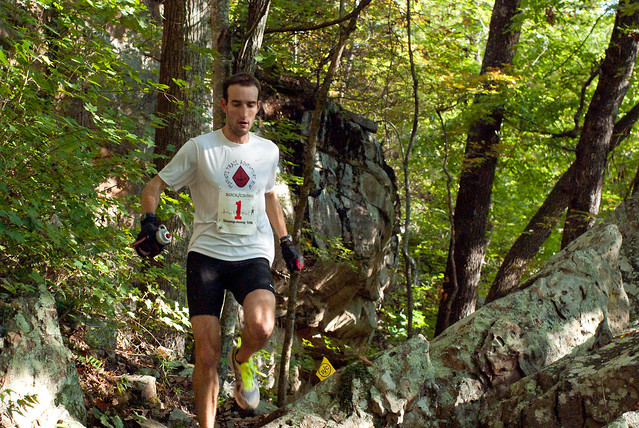 R/C: You’ve won five 50k races in 2011: StumpJump 50k, Another Dam 50k in OH, Sylamore Trail 50k in AR, Mountain Mist 50k in AL, and Germantown 50k in OH. You’ve set course records at each race. What’s next? Will we see you at any upcoming Rock/Creek Trail Series events?

David: I will plan to do Stone Steps 50k in Cincinnati Oct. 23 as a training run (I already own the course record there) and my big goal race for the fall will be the JFK 50 miler where I hope to improve on my 2nd place, 5:53 effort there last year. I don’t have any more Rock/Creek events on the calendar right now, but I will definitely try to find one that fits into my schedule. Upchuck sounds fun, but it’s just too close to JFK. And I’ve wanted to do the Stage Race for the last few years, but just haven’t been able to work it into the schedule.

Thanks again, David, for taking the time to chat with us about this performance. This course record is going to be tough for anyone to beat!