At first glance, the Marmot Plasma 30 sleeping bag is… well, it’s funny-looking. The vertical baffles represent a major departure from the classic baffle pattern we’re all used to seeing on down sleeping bags, especially Marmot down sleeping bags. The black color is a little too reminiscent of a garbage bag. The name is silly. Pick one up, though, or hop inside one, and there’s nothing funny left to say. 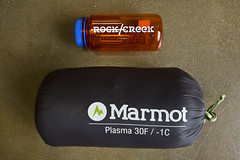 This is one serious, high-performance, technical sleeping bag. It’s incredibly lightweight, and it packs down even smaller than you imagine — see photo at right! That’s the Marmot Plasma stuffed into the included sack, without being compressed in any way. A compression stuff sack would cut that stuffed size in half.

It’s no secret that goose down provides the best warmth-to-weight ratio, and that higher-quality goose down is both more efficient and more compressible, but seeing is believing. The Marmot Plasma 30 was brand new for spring, but now it’s a well-deserved Staff Pick for fall.

Look, it’s easy to gawk at anything that has “900 fill” tags sewn to it… that’s as premium as down insulation gets, and will inevitably feel like someone has stuffed the baffles with fluffy clouds. It’s also easy for a retailer to pick a high-end product and say “this is the one you should buy” …of course we’d love it if everyone bought high-end sleeping bags! There’s no fooling on this one, though; I own one of these bags, and I think you’ll be as pleased as I am if you take the plunge.

What really sold me, personally, on the Marmot Plasma 30 is the Pertex Quantum shell fabric. You’ll notice the photos here are basically all close-ups, and that’s intentional. I’m not going to waste your time showing you Marmot’s stock image of the Plasma sleeping bag, which you’ve already seen by now. You can’t actually touch the Plasma 30 through the internet, but you can hopefully see the great lengths Marmot has gone to with this bag, and why it’s worth the relatively steep price. 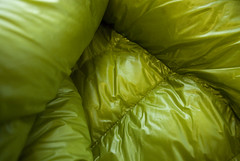 What do you think of when you hear the word “ultralight?” Do you think of how careful you’ll have to be with the presumably-fragile materials used to achieve such dramatically light weights? With the Marmot Plasma, this isn’t the case at all. The Pertex Quantum shell on the Plasma 30 has a subtle rip-stop construction, and doesn’t have to be babied.

Of course, Marmot down sleeping bags are typically as strong as they are wispy; this one just sets a new standard. I’ve honestly never climbed inside a goose down bag as lofty as this one. If there’s any doubt that 1 lb 6 oz sleeping bag can keep you warm in temperatures right around freezing, that doubt is completely eradicated the first time you climb into this bag. Between the 900-fill down, the top-of-the-line shell material and the radical construction, Marmot has clearly engineered the best sleeping bag on the market right now.

So, besides that premium 900-fill down insulation, what else did Marmot have to do in order to earn a stellar 30-degree EN rating? Check out the photo at right, which shows the hood, draft collar, draft tube and face muff. It’s probably obvious from this picture that every opportunity for ensuring thermal efficiency has been seized. It’s exactly the kind of sleeping bag you can’t wait to crawl into after a long day of trekking or climbing. 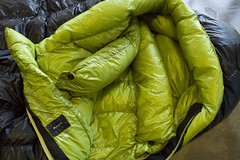 The attention to detail here is just tremendous; the hood is three-dimensional and packed with down insulation, and the over-sized face muff allows that down to loft up and fill the gaps where warmth might otherwise escape. The hood is also constructed in such a way that the zipper pull and drawstring don’t touch your face!

The draft tube and draft collar are both very large and very effective. The draft collar snaps into place, and the draft tube is not only wide enough to prevent heat loss through the zipper, it’s also designed in such a way that it won’t snag when you zip back in after a midnight nature call.

Well, apparently I can’t come up with any criticisms at all, because there is a DWR finish on the Plasma bags. I stand corrected. Well played, Marmot!

There are four variations of the Marmot Plasma sleeping bag:

If you thought the Plasma 30 was lightweight at 1 lb 6 oz, the Marmot Plasma 15 is seriously ultralight for its +15F degree temperature rating, at an unbeatable 1 lb 14 oz.