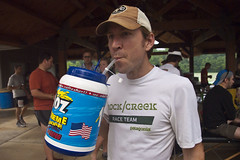 What a weekend, right? 110 of you finished all three stages, and I can only assume that all of you skipped work today and are just now rolling out of bed. The 2011 Chattanooga Mountains Stage Race is in the books; 18 miles, then 22 miles, then 20 miles on some beautiful trails, and it was a pleasure to share those trails with each of the racers.

We have consolidated the overall results and the results from each stage, along with the award categories, in spreadsheet form:

Rock/Creek’s Mark McKnight has uploaded hundreds of photos this morning, as well, to go along with the photos I’ve been sharing over the weekend. It’s definitely awesome to see everyone smiling and happy as we lurk along the trail, snapping photos! I’ve been working to add captions to the photos on our Flickr account, but that’s going to take a while. Here are links to photos from each stage: 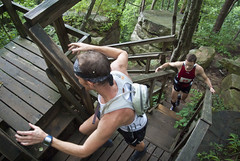 So, what was the most interesting story from this weekend? Was it Daniel Mueller, blowing past all the racers with the low numbers and dominating the race while wearing bib #101? What about David Workman, traveling down from NC for the race with Aaron Saft, only for Aaron to suffer an injury in the first stage while Workman went on to capture 2nd place overall? Or Akseli Hepo-oja, traveling from Vantaa, Finland to run the stage race, going on to finish 66th overall?

Did you see Rock/Creek racer Sarah Woerner, who only participated in Stage 3… but was the only female runner to best Annette Bednosky in any stage, giving us a glimpse of what surely would have been a tantalizing three-day competition between the two? 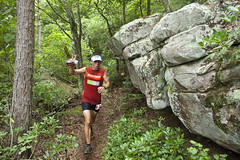 We saw plenty of new faces, too. A large group of folks traveled from Texas, including Troy Pruett (23rd overall, 3rd Male Masters), Dat Duong (31st overall) and Michelle Blackard (who wins the “best smile while standing in an ice bucket” award). Robert Weatherwax made a significant donation to Chattanooga trails in order to secure a “charity spot” after registration had closed, then drove up from Florida to seal the deal.

Well, maybe my favorite story is this one: Joe Mulcare (of Springboro, OH) needed two bags of IV fluid after falling a few hundred yards shy of the finish line and being carted off the course for dehydration… and then he walked back to the spot where he’d fallen, with 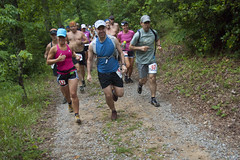 race director Randy Whorton, so they could hike back to the finish line and earn his finisher’s plaque.

So now it’s summertime, and summer in the southeast is hot. H-O-T. Our next Trail Series race is the Greenway 5-mile trail run this August, a relaxed and family-friendly event… but I know quite a few of our Stage Race runners are already thinking about the big one on the horizon, the Rock/Creek StumpJump 50k. We had a blast spending three solid days with all of you this weekend, and we hope to see you again this October, kicking off River Rocks Chattanooga!

Which compelling stories did I miss? I bet there are a hundred. Actually, I bet there at least 192, one for each of the runners who participated in at least one stage. Leave your comments below, or come talk to us on Facebook!