I received a package last week containing a German running magazine, Marathon und Mehr, along with a note from Gerd Duerr, who ran the Rock/Creek StumpJump 50k in 2007. He had written an article about the race, published along with quite a few photographs in a three-page spread in the magazine. As he said in his letter, the StumpJump ended up being a very difficult race: “It was really a very very hard job for me,” he says, “cause till the start, I thought of a lovely street-race of 50k through the beautiful Cumberland mountains. I was a little bit ignorant.” In the article, Duerr calls this “the toughest race of my life.” He wishes us luck with future races and hopes we get more racers from Europe. I’m sure we will with such great press. Thanks Mr. Duerr! The full article follows, translated very graciously by our friend Jim Johnson of the Chattanooga Bike Club. Click on the image to view the original article on flickr. 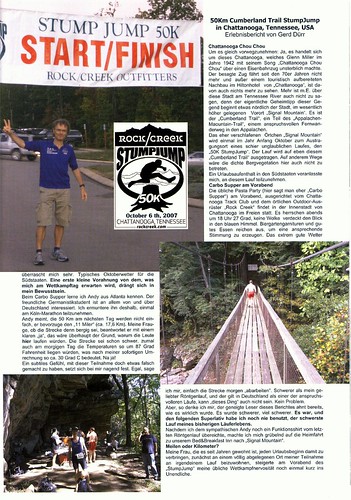 Just to get it out of the way at the outset, yes, this is the same Chattanooga that Glenn Miller made immortal in 1942 with his song about a train. The famous train hasn