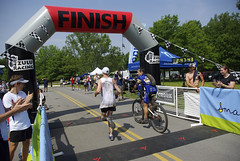 Well, as you probably know by now, the 2011 Scenic City Trail Marathon was run on Saturday, and we hope you all had as much fun as we did. On one of the first hot weekends of the year, atop beautiful Raccoon Mountain in Chattanooga, Tennessee, 500+ runners poured through the starting gate and toward the dirt singletrack with nothing but sunshine (and a media helicopter) above them.

This race just continues to grow, and the enthusiasm level this year was tremendous; we’ve been flooded with positive feedback since Saturday afternoon. First things first… here are the official results for the two distances:

Coming off of a record-breaking win at the Rock/Creek River Gorge race, North Carolina native Aaron Saft kept his foot on the gas with another wire-to-wire victory atop Raccoon Mountain. Aaron says he’s planning to run the next stop in the Rock/Creek Trail Series as well — the three-day Chattanooga Mountains Stage Race — and after consecutive Trail Series victories, he’ll head into this one with a big target on his back as the man to beat. 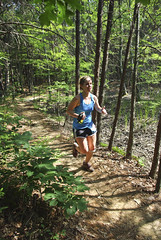 One by one, the men’s marathon finishers emerged from the woods: Aaron, then Rock/Creek Race Team member Josh Wheeler, then Feb Boswell, then fellow R/C team member Josh Hite. Who would be next? Imagine our surprise when Rock/Creek racer Sarah Woerner came roaring out of the woods and into the final turn for a fifth-place overall finish!

Oh, who am I kidding; we’re never surprised by Sarah. Her 3:13:27 finish obliterates the old women’s race record of 3:37:50, knocking almost a minute-per-mile off of the former mark. She beat the second-place women’s finisher by a whopping 41:06. In all, 4 female runners finished in less than four hours.

Rock/Creek Race Team members John Wiygul and Lance Steele also turned in top-10 finishes in the marathon. That’s numbers 2, 4, 5, 7 and 9 for the “home team,” and we’re definitely proud of the strong showing. On the half-marathon side, R/C race team members Jacob Bradley, Owen Bradley (no relation) & Jim Farmer were top-10.

And let’s not forget those half-marathoners, either, because there was some incredible times on that side of the ledger. Daniel Mueller, in taking home the overall win, knocked 5 minutes off of the former race record. Sue Kelly, who at age 50 would have qualified for the Masters Female category, skipped that entirely and beat all the other women to take home First Female honors. All told, we had 288 finishers for the Scenic City 1/2 Marathon. 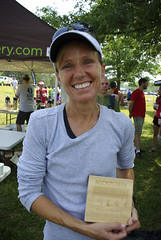 If you’re just here to see photos, you’re in luck. Here are photo albums from the race:

This race was full of interesting stories, though, and it would be impossible to tell them all. In addition to Daniel Mueller’s record-setting time in the half-marathon, both of the other podium finishers — Theodore Towse at 1:18:17 and Jacob Bradley at 1:21:15 — eclipsed the previous race record of 1:22:52. Andrew Colee, featured in our video profile last year after he chose to make the 2010 race his 500th marathon, returned and finished the 2011 race as well; he is 64 years old. Not to be outdone by Andy, Graham Callemore (age 68) and Carol Goslin (age 66) took home the “Silverback awards” for the full marathon as the oldest finishers!

Leah Jones, who won a free pair of Vasque Mindbender trail running shoes and free entry to the Trail Marathon in a giveaway coordinated by Rock/Creek and Vasque, finished 69th overall out of the 175 marathon finishers.

Our sponsors really came through, and we’d like to extend our gratitude to each and every one of them: Vasque, Salomon, SmartWool, Marmot, Toyota, The North Face, Patagonia, Greenlife Grocery, Nuun & Hammer Nutrition. These companies support the Rock/Creek Trail Series and are committed to growing the sport of trail running, and they’re worth supporting in return! Special thanks to Ultimate Direction, Archer Physical Therapy, Blue Smoke Coffee, LifeKraze and Trail Runner Magazine, as well TVA and SORBA-Chattanooga for the use of the Raccoon Mountain trail system. 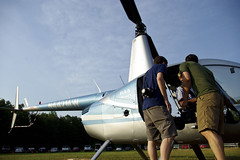 Ron Bush of the Chattanooga Times-Free Press took the time to interview both Aaron Saft and Sarah Woerner, and put together a nice article from the event. To read the article on www.timesfreepress.com, follow this link. In addition, WUTC (88.1) interviewed Race Director Randy Whorton along with Sarah earlier in the week; you can listen to that interview here.

All in all, the event was a resounding success. Thanks again to all of our dedicated volunteers and sponsors, and congratulations to each of the 463 runners who finished their respective races!