So, it’s official: sometimes when we say “rain or shine,” we’re not kidding! The 2011 Rock/Creek River Gorge trail race is now in the books, and it was a wet-and-wild one. Trail runners crossed the finish line with mud splattered up the back of their legs, and the first two across that line for the 10.2 mile race (Aaron Saft and Jacob Bradley) did so with times that bested the previous course record, a feat made far more impressive by the sloppy conditions.

In fact, everyone seemed to love the additional challenge the weather presented. Ever seen a man in a shower cap run past you in a pouring 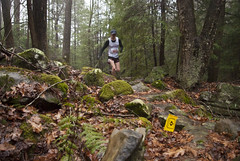 rain, halfway through a 10-mile run, sharing a toothy grin? Or women in ponchos and brightly-colored rain jackets, giving a thumbs-up and giggling as they stride confidently through a series of mud puddles? Well, now we have.

But what makes a race actually RUN? Nearly 100 of the race registrants stayed home to avoid the inclement weather, but we had 283 finishers, and it takes a lot of work to coordinate 283 people running a trail race in the cold and fog. This credit goes to our list of sponsors. Without these sponsors, the Rock/Creek Trail Series absolutely would not 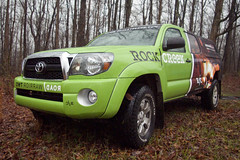 In addition, Blue Smoke Coffee was there well before sunrise, brewing coffee for all of the runners and volunteers. Toyota of Cleveland provided the Rock/Creek Race Team vehicles, which were conveniently parked on either side of the port-a-potties (basically guaranteeing everyone would have a chance to take a look). Archer Physical Therapy provided on-site first aid, and I saw them providing treatment for more than one twisted ankle. These events are genuinely a team effort, and the River Gorge Trail Race was a success because the various members of that team were ready to 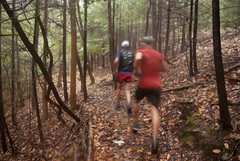 tough it out in the rain.

Here are links to complete results for both of the races, including top finishers for each of the various race categories:

Saturday’s 2011 Rock/Creek River Gorge trail race raised a total of $5500 for trail-building and trail-maintenance. All of the proceeds from the Rock/Creek Trail Series go to

local non-profits promoting the use, expansion and protection of trails in the greater Chattanooga area.

A plethora of race photos are now available in several places, including Facebook. Check out the following photo albums:

See you at the Scenic City Trail Marathon / Half Marathon this May!