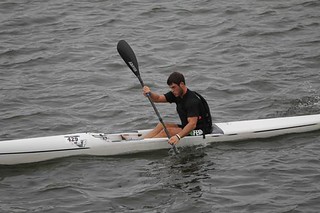 There is always a subtle nervousness when you wake on any race-day morning, whether you’re racing or directing. I generally don’t sleep well, due to plain old-fashioned nerves, but I swear my feet don’t touch the ground after getting out of bed. After almost 25 years of competition, one would assume a certain comfort level would have been reached… nope. It’s go time!

Once I reached the point of putting on my rain jacket, I started to be concerned if folks would trade their own warm beds for a kayak on this cool October morning in downtown Chattanooga.

I was further concerned when I saw the first racer drive up near the start and just stare out the window for several minutes, versus unloading their boat and pinning on their number. What doesn’t kill us makes us stronger, right? As the parking lot began to fill, I knew we were in for a battle. By far the deepest field was the Men’s Unlimited/Elite category –- a definitive “who’s who” of Southeastern flat water paddlers. Not to be outdone by a talented women’s field, either! As I was overlooking the entire field at the 10:30 racer meeting, I knew it would be a fun one to watch.

The course was different this year. All racers would tackle one race length: 4 miles. Racers travel upstream for about two miles, circle the MarineMax turnaround and bomb downstream into the new finish. To challenge boat-handling skills and give more visibility to spectators, we added a 180 degree turn with just 150 meters to go. 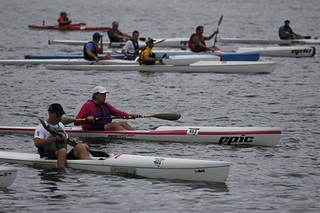 Soon, the starting line shot forward like a bullet, with the faster paddlers asserting their dominance early. All athletes were at 100% effort for most of the 4-mile “sprint”. The crowd was in the dark a bit, with few details during the race until a lone paddler came into view: Austin Kieffer. Without even a glance over his shoulder, his confident stroke carried him through the last turn and to overall victory. The heated battle for second was evident upon the faces of Eric Mims (2nd) & Chris Hipgrave (3rd) as each glided across the finish line. Chattanooga local Terry Smith and Allan Greene rounded out Men’s Elite podium.

The women’s race held equal excitement. We had word on course that the top women were shadowing each other, and a sprint may be imminent. As our top elite women came into view, Tierny O’Sullivan squashed that theory with a commanding final mile of the race. Tierney edged Karen Mirlenbrink for the overall title as women’s champion. Following closely in third was a focused Dana Richardson.

There were many great stories over the day from many categories. One couple from Memphis, TN made the trip to Chattanooga to both enjoy the River City, but to also prepare for their next adventure –- 42 Mile Phatwater Challenge in Natchez, MS. The husband and wife team of Joe and Carol Lee Royer made the 4-miler look easy, but finished with smiles on their faces and no doubt in their minds about their preparation for next weekend’s race.

Overall spectators were treated to a great race venue and some fantastic post-race entertainment. The Three Sisters Bluegrass festival filled our ears after the race was over (just another component of the RiverRocks Festival experience) a great end to a great day. However, I will look to bribe the local meteorologist for sunshine next year.

Huge thanks to all the supporters of the race. So many volunteers, The North Face, Rock/Creek, MarineMax Marina, Sea to Summit Outdoor Gear, Coca Cola, Jackson Kayak, Confluence Watersports, Northwest Georgia Bank, Scenic City Multisport and of course our friends at RiverRocks. Please visit Riverrockschattanooga.com for all festival details.