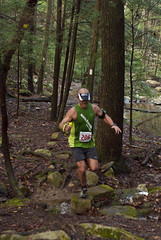 If you have read any fitness article lately, I am sure you have seen the term “core” appear. We hear talk about core training and focusing on our core muscles and with good reason: our core muscles are to our bodies what a foundation is to a house, the basis of its strength. A strong core = strong trail running.

If you are upright, reading this blog, your core is hard at work keeping you stable with good posture and will flex with every movement you have to better your position. The core muscle group consists of roughly 30 muscles that link the upper body with the lower body. These include muscles in your abdominals, back, pelvic floor and hips; basically all of the muscles of your torso.

For the most part, these muscles are buried deep within your body and are not very visible with exception of the rectus abdominis — which we commonly refer to as “six-pack abs” — and the latissimus dorsi, another very visible muscle that gets to show itself off somewhat by its V-shaped appearance.

That is pretty much it as far as glamour goes with regards to your core muscles, but they are so important in your trail running… allow me to explain.

I recently competed in the Rock/Creek River Gorge 10.2 mile trail race. I had several former wrestling buddies compete as well. My wrestling friends and I did pretty well in the race, as 5 of us were in the top 30 and two of us in the top 10. The common link is our wrestling background? By nature wrestlers HAVE to have a very strong core. The daily rigorous training forces wrestlers to develop amazing core strength.

I will use my good friend Brandon Wright as a prime example. Brandon has spent the last 6 months practicing wrestling almost every day. He had just won the Southern Conference wrestling title for the second straight year and had wrestled in the NCAA Wrestling tournament the week before the River Gorge Race. He had run only half a dozen times in that six months and never more than 6 miles at one time, yet on race day he powered through the course in 1:32 in 26th place.

Why could he do this? His core is unbelievably strong. Anytime you hit a slippery surface or hit uneven terrain (think wet boulders in the infamous rock garden) your core muscles are working overtime to keep you stabilized.

Just the act of merely standing upright calls into play a dozen stabilizing muscles to keep your posture. If you were to throw in the sharp uphills and uneven, slippery surfaces you could see how your body’s core muscles get worked overtime during this race. As your foot slips your core springs into action by counter acting as sort of a human traction control device-your core does this automatically without any conscious thought on your part. Throughout your run if your core weakens you will be forced to recruit other muscles to compensate to get you through –this is where injuries occur.

Don’t get me wrong; the cardiovascular element of trail running is important, but so is core strength. I bet everybody has noticed how a lot of older people walk in a hunched over position due to really weak core muscles that do no allow them to straighten up. All muscles work in pairs with both providing tension to keep us upright.

Your core muscles do get used every time you workout no question, but I have found that a two day a week routine targeting the core muscles will help keep your middle solid and your body performing at its peak. The following are some exercises I include in my circuit training to help attain a strong foundation:

The bottom line is in trail running core strength is everything; learn something from wrestlers (and yoga people) and develop some core strength. Figure out a way to incorporate core strength work into your routine. The hills and slippery rocks will become easier… trust me.

Tom Sell is a former UTC wrestler 8th on the all time wins list. He also has won the masters division in the last 3 Rock Creek Events and is still waiting on Dana White to send him an invite to fight in the UFC Octagon…Questions: [email protected]