How To Get Trail Running Results Without Really Trying That Hard

Hysteresis refers to systems that have “memory”, where the effects of the current system inputs are experienced with a delay in time. A lag if you will. Okay, this is supposed to be a story about racing and not a high school science lesson, but it is germane. Plus, I try to get the useful information out of the way early before I delve into the claptrap that dominates most of my writings. So, if you feel like you’ve learned something useful already then STOP READING NOW. The rest of this blather will simply suck knowledge out of your brain like a zombie or a Twilight movie. 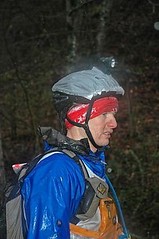 Okay, a little history here first. For many moons I lived a life of endurance sports, where work was a means to support my habits, and two-a-day workouts were commonplace. My socializing consisted mostly of chit-chatting on LSD (that’s Long Slow Distance kids) runs, rides and paddles. Weekends were for racing or, at the least, long days in the saddle, boat or on foot or any combination thereof. Now, when I say endurance sports, I’m not talking about a couple of hours here. No, that was just getting loose. A 50K trail run or twelve-hour adventure race was just a sprint. Twenty-four hour and multi-day adventures were my specialty. My magnum opus being the Primal Quest ten-day adventure race. Six months of preparation and planning followed up by a fortnight in the Pacific Northwest with cold, rain, sleep deprivation, high fever and even death as part of the equation. Good times.

Fast forward to today, just a little over a year after a…well, let’s just say a change of life. I just got back from an eleven mile trail race in Knoxville. One that a friend told me about the day before. The race was on Halloween and I was working on little sleep after a long night of fun and frolicking dressed up as Tea Party Boy, a cross between Paul Revere and a Chippendale’s dancer. Okay, that was a bad visual. My apologies. But that’s how I roll these days. No more stressing over races. No more rearranging my life for an event. I’m racing happy and loving it. I even dressed up for this jaunt in the woods. Fairy wings and a mullet sounded like a good idea at the time. In fact, this was the first time I had “dressed up” for a race in almost a year. I sorely missed doing this, since my rule is to either race well or race stupid. But the fine folks at Rock/Creek Outfitters felt sorry for me this year and let me run on their trail racing team. So, I’d been a good boy, trying to represent the franchise without looking like too much of a fool and embarrassing them in the process. But it was Halloween, so I had to go with it.

Did I mention that I was fourth overall at the race and, more importantly, the first costumed finisher? Not trying to be a braggart here, but simply trying to get to the point of all of this. Combine happiness with some training, mix in a big bowl of contentment along with a dash of racing smart and you can cook up a darn tasty batch of results. Not trying to suggest that you should do this stuff completely off the couch with just a smile on your face and a belly full of last nights beer still fermenting in your tummy. It’s still about the “Trial of Miles” and I’ve stayed in pretty good shape, but nowhere near the same level as in my former life. The epiphany came from the fact that there was much more to it than that.

And this is where the Mr. Wizard lesson about hysteresis comes into play. I’m still living, partly at least, off of the days of yore, both physically and mentally. Not only does my body know how to take the pain and suffering, but my mind can take a long trip into the pain cave and still enjoy the visit. Years of experience have also taught me about the mental game of endurance racing. Setting a blistering pace early on in order to drop those that are less experienced and a little unsure of themselves is a successful strategy. Sure, the lack of training means that the hubcaps pop off after a bit and the lug nuts rattle around at the tail end of races. But I know how to keep the wheels churning and produce some decent results. All that with a big smile on both the outside and the inside. It doesn’t get much better than that.