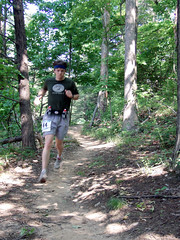 From the Times Free Press, July 17th 2008.
With some of the world’s best — and most accessible — running trails in Chattanooga, it’s no surprise the city’s trail running community is taking off.
“I think people are starting to get out and say, ‘This is really great stuff,'” said Randy Whorton, president of Chattanooga’s Wilderness Trail Running Association.
This year, Rock/Creek Outfitters and the Wilderness Trail Running Association are sponsoring more local trail races than ever.
Four new races were added, including a 50k event billed as “the most difficult trail race anywhere in the country.”
“It is beyond challenging,” Mr. Whorton said. “It’s in the middle of nowhere on a section of the Cumberland Trail that hardly gets any traffic, with hard climbs, plenty of roots and rocks and stream crossings.”
Nationally, trail races and long-distance “ultra running” races are the fastest-growing activities among runners, said Mr. Whorton, a 47-year-old vice president of Chattanooga-based Earthscapes.
Today, “the Boonies,” as the local Wilderness Trail Running Association is known, has about 65 members. Ninety-eight people subscribe to its message board.
The Scenic City’s advantage, and its challenge, is a wide range of trails literally out many residents’ back doors.