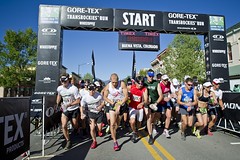 Sunday August 22nd marked the beginning of the GORE-TEX TransRockies Run we told you about last week. Salomon, a major sponsor of the muti-day trail running race, also sponsored a couple of the Rock/Creek Race Team members this year, and Rock/Creek’s co-owner Dawson Wheeler headed out to support his son Josh and teammate, Chattanoogan Nick Selbo.
Pictured here, on the left are Nick and Josh at the start of Stage 1 which commenced at Buena Vista and continued to the RailRoad Bridge Campground. This stage totals 20.6 miles and covers 2721 feet of climbing. Photo by Kevin Arnold/Courtesy GORE-TEX TransRockies Run.
Dawson called in this morning to provide these bulleted details about Sunday’s race:
~ All 3 of our teams podiumed,
~ 3rd for Josh and Nick in the Mens’ Open with 2:46:44
~ Last year’s defending champs, Eric Bohn and Jason Wolfe took 2nd and were about 12-13 minutes ahead.
~ Max King (this guy’s a great runner) and his partner Andy Martin took the win with 2:26:03.
~ Jaclyn Greenhill & Roxanne took 2nd in Women’s Open with a time of 3:21:54
~ Krissy Moehl and her partner Bryan Dayton took 3rd in co-ed with a time of 3:07:21
“The course was high desert around 9000 feet, exposed and hot; many suffered from heat & dehydration. Josh struggled the first 10 miles and Nick struggled during the last 10. Nick ran out of water with 7 miles to go, so they had to share a bottle to get across the finish” recaps Dawson. 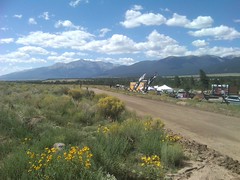 Stage 2 began this morning, Monday the 23rd. Dawson gave us the details on this morning’s course:
“Racers were bussed to the start today. They will go over Hope Pass, 12,600 feet, above timberline. The course starts with 2 miles flat, then up a gulch. They gain 3,000 feet in 2.3 miles and head above the timerline, where weather will be the thing to watch today. Storms are brewing at the summit, especially as the morning progresses. The 4th place elite male team is a couple minutes behind Josh & Nick as of the start this morning, so they’re right on their tails….”
Stay tuned for more details by following Rock/Creek’s Blog or Facebook Page