Yesterday’s stage led to some gains for the Rock/Creek Race Team. The GORE-TEX TransRockies Run continues this morning with Stage 3 of 6, and yesterday’s strong performance puts our runners in a strong position. Runners faced a 3500 foot climb above timberline to the summit of Hope Pass with a technical descent, something that favored our runners, many of whom train on technical Tennessee trails like the StumpJump course.
Photo by Kevin Arnold/Courtesy GORE-TEX TransRockies Run. 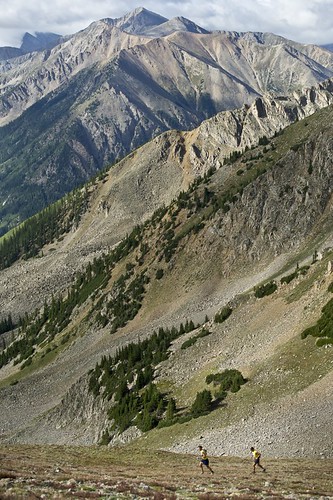 Jaclyn Greenhill and teammate Roxanne Zobava moved to 3rd with only 16 minutes off the leaders in the Open Women’s division.
In the Open Mixed division, we have an R/C team member, Krissy Moehl, running with Bryan Dayton. They’re staying strong and have moved up to 2nd place after yesterday’s stage.
In the Open Men, Nick Selbo and Josh Wheeler again took third as they continue to hammer it out against first place team Max King and Andy Martin and second place Jason Wolfe and Eric Bohn. Overall they’re fifteen minutes behind second and have about nine and a half minutes over fourth, so they can expect some pressure today.
R/C teams’ official times are: Nick Selbo and Josh Wheeler in 3rd for Open Mens’ with 4:55:19. Krissy Moehl and Bryan Dayton in 2nd for Open Mixed with 5:30:58, only 1:26 back. Roxanne Zobava and Jaclyn Greenhill in 3rd for Open Women’s at 6:11:44.
Today’s Stage 3 should be another unique challenge. Here’s what the official site says about the course:

After the straight up and down profile of Stage 2, TransRockies runners will need to change gears again tomorrow for a high-altitude 24-plus mile run from Leadville to historic Camp Hale, former home of the 10th Mountain Division. Though this route includes 3000 feet of climbing it is dished out in much more incremental fashion as runners cross the Continental Divide at Tennessee Pass before running over the shoulder of Ski Cooper resort and through rolling meadows to the finish line. Though it’s nearly a marathon in length, Stage 3 will be a trailrunning feast for the runners with lots of sweet singletrack along the Colorado Trail and beautiful treed doubletrack climbs and descents.

Dawson Wheeler (Josh’s dad and Rock/Creek co-owner) just called in and said Josh and Nick were feeling good this morning. They spent the night in Leadville carbo loading and got a nap and a good ten hours of sleep. The run today should favor the first and second place teams because it’s not as technical. The second place team of Jason Wolfe and Eric Bohn are said to want to make up some time today on Max King and Andy Martin. It’s about 50 degrees and overcast this morning. Runners will have some exposure today as they run through some high alpine meadows. We can’t wait to hear how things progress!
Stay tuned for more details by following Rock/Creek’s Blog or Facebook Page