The last couple stages have continued the gains for the Rock/Creek Race Team in the GORE-TEX TransRockies Run. Stage 4 early results are in, with some runners still out on the course.
Jaclyn Greenhill and teammate Roxanne Zobava hold on to 3rd in the Open Women’s division.
In the Open Mixed division, R/C team member, Krissy Moehl, who is running with Bryan Dayton, has moved to first place after the previous leaders dropped out of the race.
For Open Men, Nick Selbo and Josh Wheeler again took third as they continue to hammer it out against first place team Max King and Andy Martin and second place Jason Wolfe and Eric Bohn. Overall they’ve put a few minutes on second and now have about 20 minutes lead over fourth. 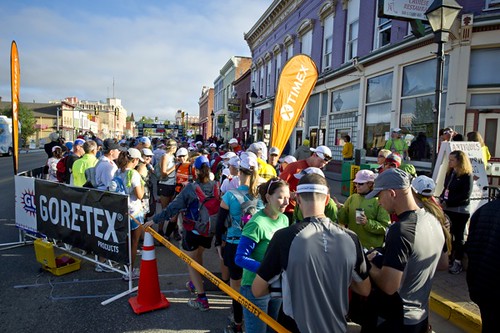 Photo by Kevin Arnold/Courtesy GORE-TEX TransRockies Run.
R/C teams’ times for Stage 4 are:
Open Mixed:
Krissy Moehl/Bryan Dayton in first for the stage and OA, 2:21:02 today (11:35:55 total time).
Open Men:
Josh Wheeler/Nick Selbo in 3rd for the stage, 3rd OA, 2:07:06 today (10:21:51 total time).
Open Women:
Jaclyn Greenhill/Roxanne Zobava 3rd for the stage, 3rd OA, 2:46:44 today (13:07:07 total time).
Dawson Wheeler (Josh’s dad and Rock/Creek co-owner) just called in his daily report and said Josh and Nick were feeling good but beat up at this point; the course tomorrow will be a serious challenge and is said to be the crux stage. They have about 4600 feet to climb over two mountains. Today’s 24-mile stage clearly took some energy, but they headed down the mountain to get some food and rest and will be back up there tonight and back at it tomorrow.
Stay tuned for more details by following Rock/Creek’s Blog or Facebook Page
Here’s a video with the Stage 3 wrapup report: