I toyed with titling this “Pop Tarts and off-brand Mountain Dew,” but I’m trying to stop intentionally confusing people. So, here you go: two race reports from John Brower, including a win at Bear Blaster 50k! — Jeff 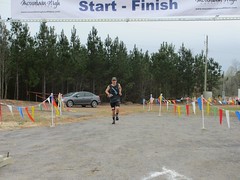 The Lake Martin 50 is a new race in Alabama put on by David Tosch and his wife. I am familiar with them from doing the 12-hour Run for Kids Challenge the past few years, and I knew that this event would be top notch, even though it was a first year. The course is advertised as two 25-mile loops, with a total elevation gain of about 5300 ft.

According to David, the course was not too difficult, but that those who had not run in the area may be surprised by the hills. Seeing that the location of the race is south of Sylacauga, home of the Pinhoti 100, I figured the trail would be similar, meaning consistent up-n-down the whole time… and my hunch was right!

Following a good night’s rest in the local state park, I was up at 4:45 eating my usual pre-race breakfast (pop tarts and off-brand mountain dew), and headed to the start. It was good to see those in attendance, as there were a few faces I had not seen in a while. That is one thing I hope never changes about our sport… it is always good to catch up with others, and congratulate them on recent accomplishments. Soon enough the sky let through enough light for us to start, and, following a brief adieu, we were off!

The field spread out appropriately, and I found myself running with John Cobb in the lead. We chatted a bit and discussed upcoming races, and soon we found ourselves at the first aid station. Our pace wasn’t crushing the spirits, so we both were comfortable with the course thus far. John is one of those guys that can settle in to a pace and hold it indefinitely, so I knew he would be a contender all day. On one of the many steep downhills, John stopped to get some debris out of his shoe, and I continued to press down the hill… and continued to press.

I felt comfortable for the first bit, cruising on the course, opening up on the numerous downhills, and taking advantage of the good terrain to speed up the pace; however, after a quick look at the data on my Suunto Quest, I knew that what I was doing was not going to last, especially considering I was not fueling properly to sustain such an effort. I soon came through the first loop, on the heels of the second place guy running the 27-miler.

But did I slow down? Naaa… I was content to ride the wave until it crashed. I knew what was coming; I just wanted to see my reaction to it. And at around mile 30 it hit: the full-on bonk!

After being passed by John and the second place guy, I hobbled into the aid station, seeing stars and trails, and totally light-headed. The great thing was, I had been here before. I knew exactly what to do, and I knew that after a bit I would be fine… I just had to re-up and wait it out. I sat down at the aid station and ate a PBJ, some cookies, some electrolyte pills, drank a cup of coke, and drank some Heed.

After a bit, I got up and took some cookies and half a PBJ down the trail with me, as well as a half a cup of coke. Slowly but surely, the light-headedness dissipated, and I began to come back around. I started moving my feet faster, and soon felt the energy I needed return to me. I started running again, right on time. I pressed on down the trail, with slight illusions of making up the 20+ minutes that I had just lost.

The Suunto allowed me to stay on track in terms of miles left, and with each mile that ticked off I was closer to the finish. I hit the last aid station and knew I was home free, with just 7 miles left to go. Could I catch these guys? I was gonna try… but alas, too much time was between us. I crossed the tape in 3rd OA, with a time of 8:13:16.

I was more than pleased; I rode the wave, it crashed as I expected, but I took the time and recovered, and then progressed to the finish. No worries at all! I had created a wonderful frame of reference in my experience bank to fall back on, which is of the utmost importance for runners like me. I need that sort of experience, where the wheels fall off, but I took the time to put them back on, and it paid off well.

A big thanks again to David Tosch for putting on the race. His attention to detail and his willingness to set out a great course made all the difference. I am excited to participate next year in the inaugural running of the Lake Martin 100! 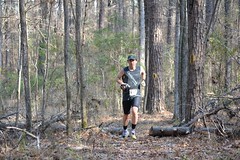 So my wife signed me up for this on the heels of the Lake Martin 50. I was going to the event to just casually run, not race… I figured that the Lake Martin 50 the week before would have my legs kinda tired, and certainly not in race shape. However, a few weeks before the event, the race director posted a picture of the trophy, a bronze bear head. I had to have it, and I was determined that, no matter how tired I was from the week before, I wanted that bear head!

My wife and I made the 8 hour drive to Augusta on Friday. The next morning, following “the usual” breakfast, it was time to run!

We went to the park in time to get our bibs (my wife had the flu the week before, so she was unable to run). The race director issued us a quick word, and following the starting pistol bang, we were off!

I really knew nothing of the trail, its conditions, nor its elevation profile, so I just took off with reckless abandon. I knew that my legs felt better than I thought they would, and I knew that I probably had a solid 50k in me. I set the pace early and did not let up. At the first aid station, I knew that there were two guys close behind, so I topped off my bottle and went. I stayed fueled properly the whole day, consuming one Huma gel every 40-45 minutes (if you hav’nt heard of Huma, google it! All-natural gel… awesome!).

As I glanced at my Quest again, I saw the speed that I was going, but really paid it no mind… I was determined to get that bear head! About a mile from the turn around, I was clicking off miles super-efficiently… maybe too efficiently… because I totally missed a turn. I would up at some highway junction, and after a brief moment to come out of the zone, I knew I was not where I needed to be.

I backtracked and found the CLEARLY MARKED turn to the right. I made it to the turn around and was anxious to see how much time I had lost, and how much I was leading by. From what I can tell I went about a mile off-course which left me up on 2nd by about .4 miles. I really got frustrated with myself for missing the markers, but I was on the sauce, and started laying down a pace that I felt was unsustainable, perhaps even for me, but especially for the guys behind me.

As I cruised into the last aid station, I topped the bottle off again, and hit it for the home stretch, counting down the miles, and praying for the help to sustain the pace. I didn’t know where they were behind me, but I knew they wanted to take my bear head… but I wasn’t gonna let ‘em!

I went through my 50k split at about 4:11, and just kept hammering… since the course was longer than a 50k and since I took a wrong turn, I really didn’t know how far I had to go to get the bear head. Soon enough, I got to the parking lot that led to the finish… the bear head was mine! I finished up 1st OA with a time of 4:48 for 36.5 miles.

Gotta give a shout out to the RD on a great event… small, intimate, and hilarious, from the logo to the trophy! And congrats to all the finishers…VAMOS!