Thanks to Kris Whorton for providing these race reports! It sounds like the Savage Gulf course was pretty hard… 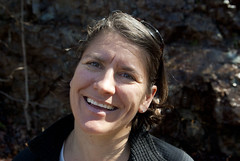 A first time for both: Black Mountain Marathon and Savage Gulf Marathon

I’m combining my race report for these two awesome, yet very different events because they are both trail marathons. The first, held in late February, begins in the lovely mountain town of Black Mountain, NC. Randy and I have heard stories about the race for all the years we’ve been in the South, yet somehow we’ve never done it. We decided 2012 would be different. Randy managed to get in the lottery for the Mt Mitchell Challenge and I got in the marathon.

We were really excited and happy to have a wonderful place to stay outside of town with some friends. The start of the race was very low key, which was awesome and we headed out of town for a nice tour through the neighborhoods in Black Mountain and Montreat. We climbed gradually until we hit the trails about 3 miles in and then it was up, up, up, beneath towering rhododendron bushes, and hard woods to the first aid station.

Despite rumors of freezing temperatures, the day turned out to be lovely and the views were spectacular. The sun was out and after the first aid station (about mile 7) the trail continued uphill more gradually. It was a combination of dirt and some rocks with ice and puddles in places, a fine running surface all around. I was happy to see the first few guys on the marathon turnaround and thrilled to see the first few women. For a minute I thought I should pick it up and see if I could place, but then I remembered the 50k I ran the weekend before and decided a finish, especially one where I felt good, was much more important. Plus 10 women had passed me before I made the turnaround and there was no way I wanted to work that hard.

Before long I was at the turnaround myself and I headed back down the mountain. I hit the last aid station, thinking I had 7 miles to go, and found out I only had 4 1/2 left. The news wasn’t enough to convince me to have a beer, which the aid workers at that last station were kind enough to provide, but it did make me happy. Until I hit the downhill. I swear the course dropped 1000 feet in a mile and a half. It was brutal! The three miles to the finish were a combination of road, creek side dirt path, and bike path. The finish looped around a lake, which was quite pretty and finished at a facility where fantastic North Face pullovers were handed out to finishers and plenty of hot soup and chili dogs were waiting. The sun was out and as I waited for Randy and our friends to finish I was thrilled it was such a lovely day.

If you know me, you know I’m not much of a gear head and I wear what I love regardless of how old it is or how it looks. Function is everything. The list is below. I kept going throughout the day using my old standbys for fueling: Heed and Perpetuem mixed in a bottle, a couple of Endurolytes and an Anti-fatigue capsule every hour or so, and cliff bloks in delicious tropical punch whenever I remembered them.

Three weeks after Mt Mitchell we headed up Monteagle Mountain for the inaugural Savage Gulf Marathon, which I knew would be tough. I’ve run in the Gulf a few times (about 20 miles each time) and remembered it as gorgeous and rocky with plenty of climbing. I also remembered feeling I’d been spanked by nature when I pulled myself out each time. I “prepared” for the race a bit more than I usually do, which means I glanced at the map. Although a portion of the rim trail was included in the race, I knew it didn’t matter how much I’d be running because the wild flowers would be out and Savage Gulf is one of the prettiest and most remote places around. The start was low key and we headed off into the woods for a few miles before we came to the stone door. This geological feature is such a treat, especially the way it narrows and then opens into a splendid low area that gradually drops down to Laurel Creek. The colors in the bottom of the gulf were so vivid, the green of the grass and shrubs so fresh and new that the world seemed surreal…or I had some heat exhaustion already.

Many of the trails are rocky and there is no way to avoid the rocks until you get back up to the bluff top on the other side, which was about mile 10, so after those first three miles at the start, the 7 1/2 on rock went more slowly. The effort was worth it as the wildflowers and flowering trees were abundant, and spectacular Suter Falls was just before aid station one. The bluff section was beautiful and runnable. The views of the expansive Gulf, seemingly untouched by humanity, were a fine reward. The trail then turned down Stage Coach Road, a historic trail, past some giant hemlocks and a man made stone wall, to the second aid station at roughly 17 miles. It was a tough, rocky descent followed by more rocks, Ranger Falls trail, and more rocks on the climb to the aid station at mile 23.

The day turned quite warm and by noon I couldn’t help thinking about how many runners would suffer due to the extremely technical terrain and the heat. As early as the bluff I started passing people who were feeling the effects of the later. It was hot. Really hot. The saving grace for me and many others I suspect was the water on the trail that invited face washing, hair wetting, clothing drenching. I actually sat in the last creek crossing for a few minutes and could feel my core temperature drop a bit. The sound of water nearly all day helped some too. The finish, three mostly flat miles after a tough climb, was certainly most welcome.

I have to say that the aid workers (mostly state park rangers) were among the best I have ever encountered at any race anywhere. They were kind, helpful, and excited to have so many visitors in their lovely park.

Once I finished, I sat in a chair next to the race director, Andy Wright, and told him the race was really tough.
“Was it too hard?” he asked. “Should we make it easier?”
“It was easily the hardest marathon I’ve ever done,” I told him, “but don’t change a thing. If someone wants an easy trail marathon, they’ll find one. This race will be a classic!”

I can honestly say I’ve never cramped due to heat, and if you know me, you know I sweat, a lot. Hammer Nutrition’s Heed and Perpetuem mixed in a bottle, a couple of Endurolytes and Anti-fatigues capsules every hour or so, and Clif Bloks in delicious strawberry whenever I remembered them seem to be the ticket for me. Anchovies help too, but not during the race (as far as I know).