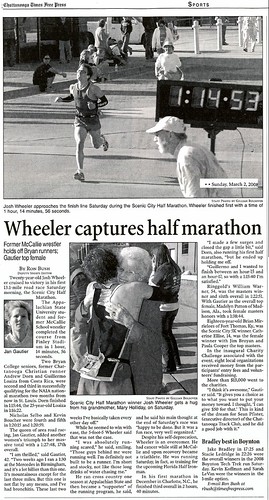 Rock/Creek Race Team member Josh Wheeler won last weekend’s Scenic City Half Marathon here in Chattanooga, TN, with a time of 1 hour, 14 minutes and 56 seconds. Congratulations Josh! He continues the Race Team’s winning streak this season with this incredible run. Josh, a twenty-year-old runner from Chattanooga, is currently a student at Appalachian State University.
Josh won the race ahead of two strong seniors from Bryan College’s running program. With his usual self-deprecating humility, he describes the battle:

While he seemed to win with ease, the 5-foot-5 Wheeler said that was not the case.
“I was absolutely running scared,” he said, smiling. “Those guys behind me were running well. I’m definitely not built to be a runner. I’m short and stocky, not like those long drinks of water chasing me.” [Chattanooga Times-Free Press, click the image to the left to view full article]

Josh has an incredible story. He was already a great athlete in high school at The McCallie School. He was on his way to being a national champion in wrestling when a brain tumor ended his wrestling days. Josh became a triathlete immediately after recovering from the multiple surgeries, and became a source of hope and a role model for many. He has raised many thousands of dollars for cancer research and was inducted into the Tennessee chapter of the National Wrestling Hall of Fame last year.

Josh continues to train for his current focus on the sport of triathlon. Saturday’s Half Marathon was training for the Florida Half Ironman triathlon. You can read more about Josh’s philosophy and see his top finishes on his Rock/Creek Race Team profile.
RELATED ARTICLES: