Coach Lee Simril, the Chattanooga Mountains Stage Race Men’s Masters winner, shares his impressions of the 2009 Stage Race. He is a guest writer for the Rock/Creek Chronicle, and with that said, here are some words from his three day trail experience: 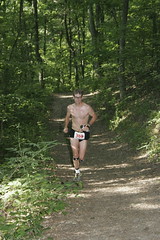 “First of all, a BIG congratulations to all the finishers this weekend – what a huge accomplishment.
Secondly…Wow, what a cool race! This was my first running stage race and I was not sure how I felt about stacking multiple days of hard and long running races together. I tend to take a couple of easy days in between hard running efforts, but I just could not resist doing this race in my own backyard.
I have to say I was pleasantly surprised how my body handled the back to back days. Maybe it is the fact that the race is held on trails and not road, so it minimizes the pounding. I felt a little stiff and tired warming up each day, but once the gun fired it felt like any other trail race.
Competing for your overall raking in a stage race is very interesting. Each day you race for a finish on the day’s race, while at the same time you are building an overall ranking for the combination of the three days. The concept is simple: each day you try to make up time on the people ranked in front of you. The trick is being able to do that without burning yourself out and getting caught by the people behind you. 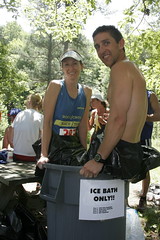 Most people in the race had their own little battles going on with the people around them, and it made for very interesting racing. After the days’ stages we all congratulated each other and had a few laughs about the events of the day.
The race organizers set up ice baths to use after each stage to aid in recovery. The ice baths were very popular and well used. Natalie Sims had one of my favorite quotes of the weekend when she advised a runner who was unsure about getting in the bucket right after he finished that “maybe you should wait on taking an ice bath…so that I can do mine now”…Now that is diplomacy!
Tempted to add this event to your calendar for next year? You do not have to be a superman or woman to finish a running stage race, you just need to build your running mileage for a few months beforehand and be willing to push yourself. The course is challenging and the weather can be hot, but it would not be a truly epic adventure if it was easy.”

Since competing in his first triathlon in 1985, Lee has had a passion for the sport. Lee was the captain of his soccer team at Brevard College and went on to run track at High Point College in N.C. He was a captain and MVP at the conference and district meets.
After college, he competed nationally as a Triathlete. Lee thought he would eventually get a “real” job and leave sports behind, until he met his wife Brenda. Brenda was equally passionate about endurance sports, and within a few years, they had formed a four person Adventure Racing team that won the United States Adventure Racing Association’s (USARA) National Championship.
Lee has coached Soccer, Masters Swimming, Youth Swimming, and Track and field for over twenty years. For the last thirteen years he worked for the American Bicycle Group (ABG), which manufactures Litespeed, Merlin and QR bicycles. During this time he worked with top athletes from around the world in the sales and design of wetsuits and bicycles.
Check out the Simril Multisport Coaching website to find out how you can “Reach Your Full Potential” through SMC for quality consultation and training www.simrilmultisportcoaching.com/default.html.