To the outside audience, what looked like a cultist gathering around the fire pit was actually our Rock/Creek Trail Series race participants staying warm before the race start at 7:30am. Nearly 400 runners, including volunteers, met atop Lookout Mountain at the start/ finish hosted by Covenant College for the Lookout Mountain 50 mile and 10k. Originating from the Lookout 100k, the 50 miler is a new and improved trail race which occurred on Saturday December 18, 2010. The easily accessible, yet remote trails, feature Lookout Mountain classic sites such as, Cravens House, Skyuka Springs, Lula Lake, the Covenant College cross country course and the historical Civil War Lookout.

Those daring enough to finish their race calendar in the chilly Southeast winter, proved to be on their “A game”, beginning with the 10k. The finisher’s podium for the 10k welcomed Men’s First Place Overall Finisher Matt Jenkins from Soddy Daisy, TN with a time of 38:13. This 17 year old young-gun was just 12 seconds short of setting a new record. Coming in Men’s Second Overall was Andrew Highlander from Hixson, TN with a time of 38:29 and Men’s Third Overall was Clay Warner from Beckley, WV with a time of 39:58. All three men finished sub 40 minutes, which establishes new records for second and third place finishers.

Women’s 10k overall finishers were Elizabeth Callaway from Athens, TN with a time of 46:29. Second Place Women’s finisher, with a time of 46:44 and long time friend of the Rock/Creek Trail Series was Johanna Gartman from Chattanooga, TN. Both ladies have set new course records for first and second finishing times, beating the original 2009 first place time of 48:32. Third Place women’s overall goes to Erica Simpson with a time of 48:43. 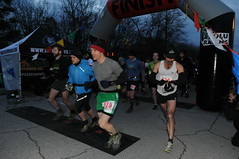 The 50 miler, proving to be one of the hardest and most beautiful trail races in the Southeast, welcomed the following finishers to the 50 mile podium for 2010.
For First Men’s Overall, Troy Shellhamer from Louisville, KY and representing “Quest Running” finished in 7:42:23, followed by Second Place Finisher Chris Petit from Milton, TN with a time of 7:55:13. Third Place Men’s Overall goes to David Worth from Gatlinburg, TN with a time of 7:59:29.

A new 50 mile course record for First Place Women’s has been set by 2011 Rock/Creek Race Team member, Sarah Woerner from Dunlap, TN with a smokin’ time of 8:51:49. Woerner joins the team after a strong 09-10 season with results including First Place Women’s (24:42:28) at the Pinhoti 100 in November. Second Place Women’s Overall goes to Patagonia sponsored athlete and Norcal Ultras Race Director, Julie Fingar from Granite Bay, CA with a time of 8:59:22. Julies time is a new course record for a Second Place Women’s Finisher. Third place Women’s Overall goes to Rock/Creek Race Team Member Natalie Sims from Signal Mountain, TN with a time of 9:11:57.

Rock/Creek would like to thank the Trail Series volunteers, race participants and sponsors (Vasque Project, Salomon, SmartWool, Marmot, Hammer Nutrition, The North Face and Wild Trails) for making the 50 miler and 10k a wonderful race and spectacular finish to the 2010 race calendar.
Check back in the new year for the opening of registration for the 2011 Rock/Creek Trail Series. We look forward to seeing you out on the trails.

Visit Rock/Creek’s Lookout Mountain Results page for links to the 10k results and 50 miler results.
Photos on the Start/Finish can be found on Rock/Creek’s flickr site here >