The winning streak continues for the Rock/Creek Race Team. John Anderson took first place in the Old Pueblo 50 Mile Endurance Run in Sonoita, Arizona. John, originally of Signal Mountain, Tennessee, currently lives in Boulder, Colorado where he studies medicine at the University of Colorado. He joined the team this year. Here’s his race report from this weekend: 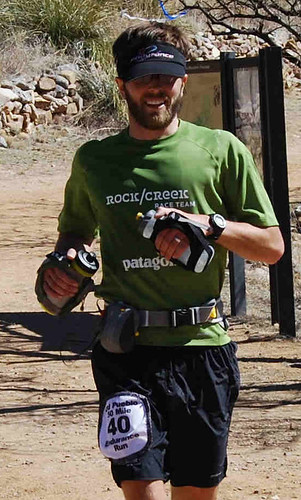 I’ve been going to the Old Pueblo 50 Mile trail race for 3 years now and it’s always a well run event. It takes place in the mountains outside of Tucson and the course climbs about 7500 ft throughout the race. If you see a helicopter it’s not because ESPN 8 is filming the race–it’s close to the Mexican border so the area is fairly heavily patrolled. I didn’t see any Border Patrol during the race but driving to and from the start/finish I saw several government trucks.
The first half of the course is a mix of singletrack on the AZ trail, 4WD roads, desert gullies, and about 4-5 miles of gravel road. The next half is mostly single track as well as some 4WD roads. Along the course there are plenty of yucca, cacti, and amazing desert views. There are even a few creek crossing, but I’m pretty sure that even the smallest playboat wouldn’t fit.
This year was definitely the hottest one I remembered and the hottest that the race director, Duane Arter, remembered as well. The day started off in the mid 40s and was somewhere around 80 by the time I finished.
The morning was clear and the moon was still bright enough to run without a headlamp, so off we went trying to get some miles in before the sun came out blazing. I was feeling a bit under-heat trained, but as luck would have it so were Sean (Team Inov-8 runner) and Nate (Team LaSportiva runner). Anyway, The three of us went out pretty hard as we knew that it would be hot soon. Sean dropped back on the climb up Gunsight Pass (mile 17ish), but then Nate left me around mile 25 on the way up to California Gulch.
I caught Nate at mile 33 and we ran together for the next 3-4 miles, and then Nate started having some ankle and hydration problems (by the time he finished his ankle was beat up pretty badly from the loose grapefruit sized rocks and steep downhills). 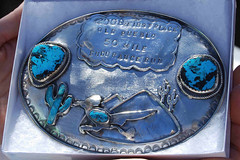 Not really knowing where these guys were, but knowing that they were both strong finishers (Sean has won Mt Masochist and this event in the past and Nate had the CR at Wasatch for several years) I tried to push a little bit on the way out of the aid station at mile 40. Also, I knew that Matt Sims might cover me in fish oil and let his cat Roscoe chase me if I got passed in the last few miles.
My calf started to cramp up and I was starting to lose the hydration battle, but I smelled the barn (or was it my own body odor?) and headed to the finish. The mile long meadow at the end seemed to take forever but I did blow by a few trees like they were standing still. Anyway, it was a fun weekend and I managed to convince a few folks from VA to check out the StumpJump in the future.
RELATED ARTICLES: