That’s right: Mining on public lands is still governed by a law from 1872. 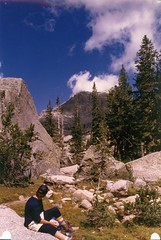 The idea back then was to encourage pioneering prospectors to find and develop gold, silver and copper. The government wanted to settle the vast frontier and foster local economies from Appalachia to California, so mining was given top priority for use of public land, which miners could buy land for as little as $2.50 an acre. And they didn’t pay a dime for the riches they removed. Not a bad deal … in 1872.
More than a century later, the frontier has been tamed and populated, and picks and shovels have been exchanged for chemical processing, large-scale blasting and house-sized earthmovers. Communities have grown up alongside public lands and now look to those lands for watershed protection, wildlife habitat and recreation. Today, rock-climbing, kayaking, hiking and mountain biking are widely popular, making important economic contributions to many communities and promoting an ethic of protection for treasured routes, waterways and trails.
Many of these committed outdoor enthusiasts have been appalled to find that the lands they revere are still treated with century-old disregard, and that priorities set in the days of Ulysses S. Grant still rule the use of millions of acres of national forests and other public lands.
As the people of Tennessee know well, mining, without modern safeguards, can have catastrophic impacts. Millions have been spent to restore Polk County’s Copper Basin mining district, which suffered devastating pollution from mining and sulfuric acid processing, until a solid partnership of state, federal and private efforts restored the area.
Sadly, the pre-restoration story of Copper Basin is repeated across much of our nation’s public lands. Mining under 19th-century policies has left a legacy of more than a half-million abandoned mines, and hard-rock mining has polluted 40 percent of Western watersheds. The estimated cleanup costs of this toxic legacy are more than $50 billion, and American taxpayers may be on the hook for a good portion of this total. Even if funds were readily available, cleanup would require decades. Enough is enough.
Last year, the U.S. House of Representatives passed meaningful reform with the Hard-rock Mining and Reclamation Act of 2007, which protects special places like wild and scenic rivers, roadless national forests and areas of critical environmental concern. This bill institutes a reasonable royalty for extracting hard-rock minerals from public lands, as is required for coal, oil and natural gas. These funds would pay for long-overdue mine cleanup. The bill would also authorize denial of mine permits if operations would cause “undue degradation” of public lands and waters, and it improves enforcement of environmental laws and citizen participation.
But for these reforms to become law, the U.S. Senate must also act — and it must do so soon. With the approaching summer breaks and fall election, time is running out. If the Senate doesn’t act the House’s hard work will be lost and our elected representatives will need to start over next year. New claims on public lands have jumped by 80 percent in recent years, so the Senate must get moving now, not only so existing pollution can be remedied but also to protect important recreation areas and prevent future contamination.
Tennessee Sens. Lamar Alexander and Bob Corker both know the value of recreation, so we look to them for leadership and initiative. Alexander has led presidential commissions on recreation and Corker, a member of the Senate Energy and Natural Resources Committee, has supported outdoor recreation since his days as Chattanooga mayor. They are both positioned to help usher mining reform through the Senate. Their efforts could protect both our public lands and American taxpayers.
About the authors.

Lance Brock is co-owner of Climb Nashville and has served on the Access Fund and Southeastern Climbers Coalition boards. Dawson Wheeler is co-owner of Rock/Creek Outfitters in Chattanooga and serves on several boards, including the retail advisory board for National Geographic Explorer and Grassroots Outdoor Alliance.