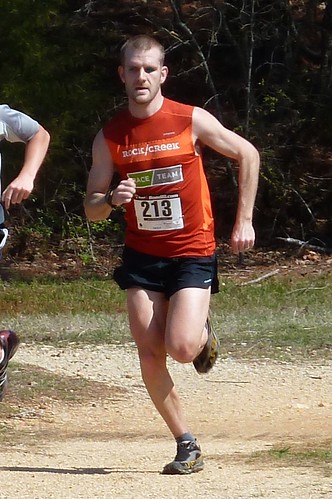 I’ve been racing longer distances for the past few years, so I was excited to hear of another short distance trail race (in addition to the Rock/Creek series.) Every once in a while it’s nice to remind myself how bad short distance races make you suffer! On Saturday, March 12, I lined up at the start of the 4-mile Booker T Trail Run at Booker T. Washington State Park in Chattanooga.

Since this was the first year of the event, the turnout was very small, but that didn’t take away from the excitement of racing. The race was run entirely on the mountain bike trails in the park, and we even got to run on a new section of trails that was just built. Since Booker T. was made for mountain biking, the course (click here for map) flowed very well and was relatively fast with minor, rolling hills. The course was marked well, except one intersection that provided some runners with a little detour. The race director said this would be corrected for next year’s race.

Overall, this was a good, low-key event on a fun course, and I recommend it for next year. I had a good day and was glad to grab 1st overall, especially since it was my birthday!

Thanks for the report, Sam… and happy birthday! Look for Sam and many other runners from our race team at the Rock/Creek River Gorge Trail Race coming up on March 26th.