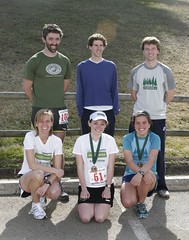 This year’s Southern 6k & Kiddie K, sponsored by Rock/Creek & Wilderness Trails Association, hosted 167 participants at the Southern Adventist University on Sunday, February 21, 2010. The welcomed sunshine brought extra excitement to the racers lining up at the start/ finish line while winter training anxiously waited a test run. At the sound of the alarm, the second annual Southern 6k race blasted off and the race initiates the first of ten race dates in the 2010 Rock/Creek Trail Series.

Benefiting the Southern Adventist University Outdoor Leadership Program, this short, family friendly event guides racers on Southern’s single track Biology Trail famed for its strolling trails through the woods. The good weather seemingly empowered Overall finisher, Jack Mcafee, as he plowed over the “King of the Hill” to finish with a smoking time of 27:01. His finishing time, sets a new course record compared to last year’s top time of 27:25. Second Place Men’s Overall was David Macias with a time of 27:40 and Third Place Men’s Overall, Rock/Creek Race Team Member Kevin Boucher, came in shortly afterward with a time of 27:45. 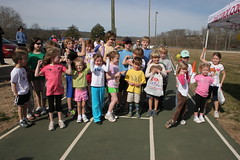 We are especially proud to announce the success of the 1st annual Kiddie K! With friends and family cheering on, more than 26 participants, ages 3-12 years old, pinned their ears back and gave it all they got to cross the finish line. Congratulations to all the kiddos who participated.

To view the Final Overall Results from the Southern6k, follow this link to Rock/Creek’s Southern 6k Results.

The next race in the Rock/Creek Trail Series is the River Gorge Trail Race on March 27th.