John Wiygul and John Brower fought hard for the win at this past weekend’s Upchuck 50k. Wiygul, from Chattanooga, came in seconds before Brower, a former Chattanoogan living in Jackson, MS. Wiygul captured first after almost five and a half hours of tough trail running. Stephen Smith of Chattanooga took third. Wiygul has raced many of our trail races and will be joining the Rock/Creek race team for 2009.
This first annual (official) Upchuck 50k took place on the Cumberland Trail and was presented by Rock/Creek and The Boonies. We had 23 finishers on this rather difficult course; the cold temperatures and off-and-on rain certainly contributed to the difficulty of the course. Several stream crossings ensured that the runners were going to be wet even before the rain.

Mark took a few photos from the finish line >
Robert took photos on the trail >
See full race results online >
We’ll have a full race report from Chad Wamack in the next couple days, but in the mean time I thought I’d share Matt Sims’ recollections of the first (much less official) Upchuck:
History of the Upchuck 50k (as told by Matt Sims) 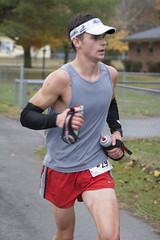 Chad and I run together all the time. I am well aware of his dietary habits, running pace, what he likes to talk about when he runs, etc. This particular day we headed out to run 36 miles of the continuous Cumberland Trail segment that has recently been completed outside the Chattanooga area.
We did the normal car drop off at the “take out”, and then shuttled the car a LONG way to the beginning of what would be a very memorable trail for us both. Chad likes to plan the route and is very methodical in what he might need. Lucky for me really, because I am not a good planner and I typically rely on Chad to figure it all out. We decided to run South to North, which now the official Upchuck 50k course runs North to South.
I won’t bore you with the detail of the actual trail description and what we saw and how we felt and how many times I stopped to pee, etc. I will simply say, the Cumberland Trail is ridiculously well done. We are really fortunate to have the trail system and to have such a thoughtful group of planners and volunteers to make it happen.
I have gone through times of being very disciplined with what I eat and what I drink. I don’t typically get caught up in all the fancy powders that are available today, although certainly I should because I bet I would be a real superstar runner. We do have a couple of really incredible runners in town and they are fanatic about Heed, an electrolyte replacement drink. They put the “hard sell” on Chad and I think Chad bought a couple of gallons of this stuff and probably stock in the company at the same time. So there we are running along with hydration packs. Mine was filled with water and Chad’s was filled with Heed. Keep in mind this was the first time he had really used it, which typically isn’t the best idea when you are pretty much committing to an all day run. But, oh well. Chad knows what he’s doing.
We get about 18 miles into the run when we cross the Hwy 111, Jones Gap Road Crossing. This is unfortunate in some ways because you actually have to run on a bit of pavement to join the next trail segment, but in doing so you run right by a convenient store. Chad and I stopped in there to re-fuel and talk about Nascar with some of the locals.
Chad comes out of the store with a Mountain Dew, Gatorade, Water, Snickers, Cheese Crackers and a Fig Newton. I remember observing his carefully planned out purchase, and I have to admit I was a little jealous. Chad has a “go big or go home” approach to things, so I just figured he would carry what he didn’t eat in his pack and eat it as we go. I was wrong. Chad dug in to what I comically refer to as “the last supper”.
Off we go and off go the wheels. It took about 3 minutes of running before I heard Chad say, “I don’t feel so good”. I proceeded to turn around and see this bloated bellied figure start puking all over the place. I ran ahead so I didn’t start puking myself. For the next 10+ miles Chad would puke occasionally and then start running again, all the while that Heed was keeping him company.
All in all I had a great run and Chad had a terrible one. It’s funny now and I think he thinks so too. Just remember not to get carried away this year at the Jones Gap Road Convenience store.
Learn more about the Upchuck 50k >