“Theory of Relativity”
-by Jim Farmer

Einstein turned the world of physics on its head by postulating, and then proving, that everything is relative, including time. In the famous Twin Paradox, one twin is launched into space in a rocket that travels close to the speed of light. How one would achieve this is beyond me, unless it was fueled by Santa’s magic dust, unicorn tears or leprechaun farts or some combination thereof. But this is theoretical physics here, where fantastical is ordinary, so just roll with it. Plus, it could be the solution to our energy woes.

Point is that, when the rocketing twin returns to earth, he has aged less than his terrestrial sibling. The speedy twin’s biological clock, and any other clocks on-board with him for that matter, had been running slower “relative” to the clocks here on earth. Sounds freaky, but it’s been proven over and over again. Believe!!!! 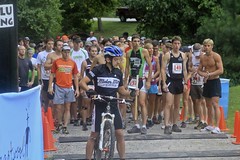 This is the kind of crap that was going through my head as I rode my bike along the Riverwalk on the way out to the Greenway Farms in Hixson. It’s a “relatively” flat ride, the only climb (if you can call it that) being the bridge going over the river. A perfect 45 minute warm-up for the Greenway 5 Mile trail race on a humid, but “relatively” temperate, August 6th morning.

This is one of the easy trail races put on by Rock/Creek and the Wild Trails folks, and is marketed as beginner friendly. Easy, of course, is a “relative” term. Starting to see the theme here? Okay, I’ll stop with all the air quotes now.

If you didn’t know the course or didn’t look at the map online, like my neighbor Micah for example, the start of this race would lull you into a false sense of security. The first mile and a half-ish is on crushed gravel and grass and flat as a pancake. The first “oh god, what have I gotten myself into” moment for the newbies comes when they hit a short section of trail that sits between the North Chickamauga Creek and the limestone quarry that was mined to build the Chickamauga Dam just a few miles downstream.

Racers must dance through the precipitous boulder-strewn trail with steep drop-offs on either side of them. After a short respite — although a mostly uphill one — on pavement, racers are sent straight up a half mile climb on dirt single-track to the top of the Boy Scout Trail on the south end of the park. Descending the other side of the loop trail on wobbly legs must be scary to some of the uninitiated but exhilarating to others. The latter being the new converts to trail running, getting the first hit of their new drug of choice. 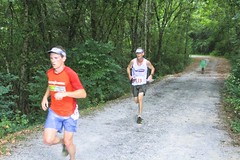 Although this isn’t my first rodeo, by far, I still get that tingly feeling in my nether regions on a sketchy bomber downhill, letting it all hang out and not thinking about the possible repercussions of taking a header into the next tree.

A newbie I’m not. In fact, as of race morning, I had forty-three years of experience under my belt. Life is a race, of course. I was starting off my birthday celebration by suffering like a dog for thirty-five minutes in the humidity chamber of the Greenway 5-Miler. But this is what I do. It’s fun… no, really …I swear. Fun.

I was throwing myself a birthday soiree later on that evening, so I needed to get on the pain train first thing or else the day would be a total loss. That’s how people like me think. It’s a constant game of give and take in my head. Work hard then play hard. Set the life media player on shuffle and repeat, click on the Play button and let the dancing commence.

I announced to all the fast runners at the start line that I had dibs on the front row because of my birthday boy status. For some reason they obliged. There are some really nice people that do trail races. I guess I should try not to take advantage of them too much, but it’s like shooting fish in a barrel sometimes. But hole shot or not, I was not gonna keep up with all the fast kids for long.

I veered right when I exited the start chute and let them pass, settling into a fast pace, for me at least. Keeping the leaders in sight, we headed out into the wide grass path encircling the wildflower field. I don’t know what our first mile was but I’m guessing it was around a six minuter. Too hot for this old man. Exiting the wildflower field and heading to the quarry, I settled into a more manageable pace, picking it up before the rocky technical section above the quarry. I didn’t want to get stuck behind too many inexperienced trail runners who might not want to take the kind of chances I do on the technical stuff.

I caught three of the runners in front of me as we approached the exit of the quarry trail, but I watched them gap me again on the ensuing uphill slog heading to the Boy Scout Trail. Albeit a slight case of false advertising in my opinion, this trail was not made from the bodies of Boy Scouts. Kind of like Girl Scout Cookies. Apparently, there are no actual Girl Scouts in them. Disappointing but true… These are jokes folks. Just harmless jokes.

On the map, the Boy Scout Trail looks like a coat hanger. You enter at the hook and, no matter which direction you go when you hit the hanger part, it’s single-track uphill to the top of the ridge. Going clockwise allows you more respites along the way, but steeper pitches in between.

The race took the counter-clockwise direction meaning that it was a steadier climb. Personally, I prefer the former over the latter, but when in Rome…

I settled into the climb as my stomach was churning a little too much, putting the kibosh on any notions of bridging the gap to the young punks in front of me. I picked things up after the left-turn onto the straight part of the hanger because of the foot steps and heavy breathing behind me. The testosterone had kicked in. I may not be able to catch the small group in front of me, but I damn well wasn’t gonna let some snot-nosed, acne-faced teenager, who gets his summers off, pass me on my turf. Heck no. But I’m not bitter or anything. Of course not.

Knowing the trail like the back of my hand, I was able to surge in spots where I knew I’d have a place to recover just around the corner, dropping my mouth-breathing pursuer in the process. Once on the downhill, I was in my element and distanced myself from my pursuers. The only challenge left was the paved section going above the quarry. Steep, as easy, is a relative term. Let’s just say that it’s steep, and qualify it by saying that I’ve been on a lot of steep stuff over the years. I did get passed in the field heading towards the finish line, but managed to hold on to fifteenth place overall before the wheels came completely off.

After looking at the results online, I was able to confirm my suspicions: this race was loaded with young whipper snappers. I reclassified my standing from fifteenth overall to sixth overall, netting out the young’uns that can’t even rent a car yet. Two years away from the Masters category, I’ve learned to make up my own categories, even if it’s just to feed my ego.

But age, like everything in this report, is relative. Forty-three is just that, a number. Having gone to my twenty-fifth high school reunion just a month prior, I got to compare and contrast myself with my peers. Relatively speaking, I’m doing pretty well for an old man. In fact, you could say I’m the bomb… but that’s only because my birthday is on the anniversary of dropping “Little Boy” on Hiroshima almost sixty years ago. Of course, little is also a relative term. One that feeds the fire in the belly of this five foot, eight inch frame come time for the gun to off.