Each year, Rock/Creek Race Team member Sheridan Ames volunteers himself to play course sweeper for the Upchuck 50k. Due to the relatively long distances between aid stations on this course and the general remoteness of the trail, there aren’t many opportunities to drop out of the race; luckily, the Grim Sweeper himself will scoop you up an escort you to safety, should you sprain an ankle or completely bonk. Here’s how the 2011 race went down, from the back of the pack. 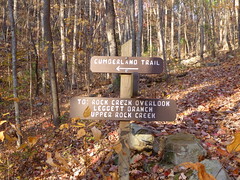 I have run this race every year, and each time there is a different feel to the event. This year was no exception. The allotted number of race participants is strictly limited, and registration fills quickly, so it was a big surprise this year when nearly 20% of the field who had registered failed to show up at the race start. I believe that it was a direct consequence of being fearful that The Grim Sweeper* would catch them and end their day early.

*The Grim Sweeper starts one hour after the race starts and endeavors to run down the racers. If any are caught before the 2 designated aid stations they are removed from the race, in order to ensure all runners finish before the shadows of darkness fall on the valleys of Upchuck.

Those that did run this year had nearly perfect running conditions and the pace (as seen from the very back) seemed to corroborate this. There were still some leaves on the trees, but most had fallen to make a colorful mosaic of fluffy carpeting on the trail, covering the random loose and often slippery rocks beneath.

The first (of 3) sections prior to the first aid station was uneventful, as all the runners had successfully made it through well before I could run them down. I had already bagged two entrants by this point last year, so I was already behind! The last half-mile or so here goes through a pine tree farm and is usually my least favorite area. This year, however, was a glaring exception. The pines were eerily calm and seemingly devoid of all noises. I could only hear my own footsteps and heart pounding in my ears. I walked a good portion just to enjoy the calming atmosphere.

The next section of trail proved to be more fruitful. I was thankful, however, not to encounter a runner (totally lost and out of it) coming back toward me, as happened one year. I stopped once to talk to the Rangers who man a tricky section of the trail and updated them on trail conditions. These gentlemen do a fantastic job of maintaining the Cumberland Trail. If you don’t already support the Cumberland Trail Conference, I strongly suggest you do so.

This middle section of the trail undulates more than the other two, and challenges you with some steep climbs and sharp descents. It also has multiple bridge crossings that go over the river/stream, with beautiful views of the valley on either side. The campsites in this area were vacant this year, which added to the feeling of remoteness, a hallmark of this event. I was still a couple miles out from the next (and last) aid station when I saw a pair of figures not far ahead. Closing speed was fast, so I knew they were either hikers or runners who were clearly having a bad day. As it turned out, it was the latter. I stayed with the two of them until the aid station, where they unceremoniously climbed into a race crew vehicle for their ride back to the finish.

That done, I etched two more race numbers on the blade of my scythe.

The third and final section of the trail has been and continues to be my favorite. I rolled out of the aid station full of drinks and snacks and slowly began the process of reeling in the last runner(s) if possible. The first few miles of the trail are overhung with giant trees and run along a stream. Very dark and foreboding, but footing is good and terrain is rolling. After that you enter an area strip-mined years before and the trail turns faint, at best. It’s here I stop to re-flag an open vertical shaft about 18″ in diameter and in so doing notice the oddest, and creepiest noise I have ever heard in the woods. I am “sure” that it was just the trees rubbing in the wind, but my imagination had many other things in mind.

Thirty minutes of race pace later I am exhausted but come to a slope at the base of vertical cliffs that is so covered in deep layer of yellow leaves it looks like an unending field of saffron. You can’t help but slow and admire the beautiful view. I walk for some time, soaking it all in. The trail then descends quickly to a river crossing, this year low enough you don’t get wet feet unless you are really uncoordinated and slip on the slick rocks slightly protruding above the surface. Another climb, another descent later you get to the last river crossing and the last opportunity to bail (or be removed from the course) before committing to the last 5 or so miles.

I soon ran down the last runner and together we proceeded to the road where you turn and take it to the finish line. It took some time to collect all the flagging and signs as I completed this final leg, so I did not enter the parking lot/finish line when he did. I was however immediately met there by someone who asked if I knew when the “sweeper” was coming through. I smugly said I knew exactly when he was, and informed her he had arrived.

It was then that her face went ash white. Her racing husband was not among the counted finishers, but had made it past the last checkpoint at the final river crossing. 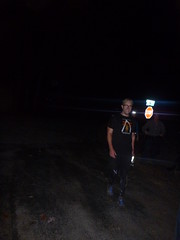 Race control was informed and search teams were immediately dispatched. He was not quickly found, but about the time genuine panic was about to set in, he called on his wife from a cell phone provided by a random hiker who just happened to be in the woods hiking at night. Go figure!

He had failed to make the final turn down the road; instead, he leapt over the guide rail, continuing down the unmarked trail and back until he was overcome by darkness and fatigue.

It was at this point that he stopped to make a nest in the leaves and wait until morning. Thankfully the hikers came by before then!

All runners were treated to big, fat juicy hamburgers cooked to order on the grill with all condiments you would expect, sweet desserts, snacks and all manner of drinks. A genuine feast for all. I of course took full advantage and refueled the tank I drained while running for the previous 8 hours.

As is the norm at all the Rock Creek Trail Series Races, there were plentiful give-a-ways and freebies, so everyone went home with something extra. I scored a pair of PhD SmartWool Compression Socks that I might otherwise not have purchased. I immediately put them on. Know this; if you don’t already own a pair you should immediately go to the Rock/Creek web site and purchase a pair, either the SmartWool PhD graduated compression LIGHT or SmartWool PhD graduated compression ULTRALIGHT. I have worn them multiple times after long runs and races since getting them, and can personally attest to their effectiveness in post-race recovery.

I am already looking forward to sweeping the race next year, and will sharpen my scythe a little more in the event that I can catch more participants. Train hard and sign up early… I look forward to running you down. 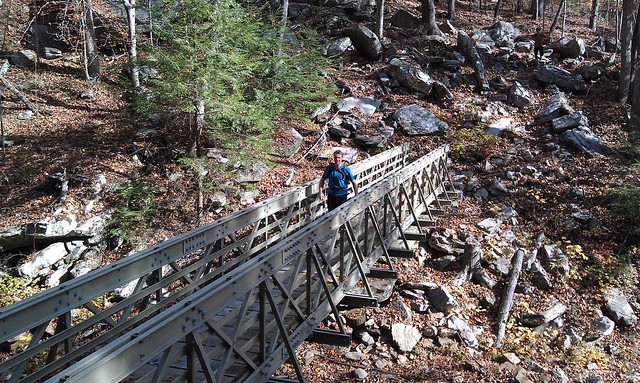