Here is this week’s update from Fynn Glover of Expedition Y! Rock/Creek is a sponsor of the expecition, and he’s been kind enough to do some writing for us. Check back every Friday for updates! To read last week’s entry, go here. 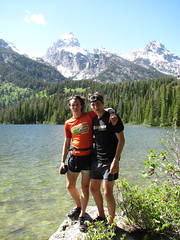 We ran at the base of the Tetons on a bright and clear day. The altitude challenged us, and we panted heavily as we struggled up technical single-track. We had been told to exercise caution. Mother bears and moose had been spotted along the trails often in recent weeks with their young. As we ran we clapped our hands loudly and shouted random outbursts as we rounded blind turns. We saw neither bears nor moose.

We rested briefly on a rock in Taggert Lake at the foot of the Cathedral Group. Ry, in line with the philosophy he has adopted throughout this project, you only live once, plunged into the freezing water and emerged in panicked shock, as Russell and I laughed aloud and felt glad with our dryness. There was no need to regret his swim though, for the bright sun, and two more miles on the trail, warmed him almost immediately. 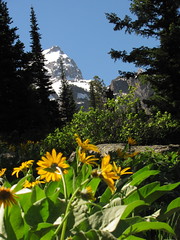 We drove from Jackson, WY to Bozeman, MT through the western portion of Yellowstone. We wanted to camp and run in the park, but we needed to keep moving, in order to survey Montana State University students, before heading north to Glacier National Park and eventually back into Canada.

Yellowstone entertained us with its displays of thermal activity and charismatic mega fauna. We were thrilled to see more buffalo, elk, an eagle, hawks, hundreds of deer, and a fox. We arrived in Bozeman and ate at the city’s local food Co-op, which is one of my favorite groceries in the United States. The Co-op would provide a happy home for us for four meals and hours of data input and preliminary analysis.

We arrived late in the afternoon at MSU, interviewed over fifty students, did pushups and played Frisbee briefly in the quad, and returned to the Co-op for more data entry, before retiring to our beds at the Bozeman Backpacker’s Hostel.

We rose at dawn for an early morning run to Pete’s Hill, a wonderful system of urban park that allows for 360-degree panoramas of Bozeman and its surrounding plains and mountains. Bozeman’s urban park system is fantastic and we discussed the benefits of being able to mountain bike or trail run to work in the morning. Indeed, the town’s planners have maintained a sense of regional authenticity, by connecting residents to the area’s natural heritage of prairies, rivers, and mountains.

After spending the morning compiling a preliminary assessment of the data obtained during the first 1/3 of Expedition Y, we drove six hours to Glacier National Park in northwestern Montana. With 16,000 square miles of protected land, Glacier has been described as the Crown of the Continent, and the Blackfeet described the area as the backbone of the world. These descriptions are not exaggerated. Glacier’s beauty is immense…torrential…supreme. 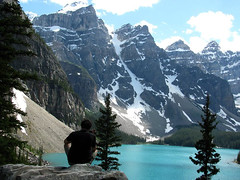 Driving into Glacier is sensational. It feels as though you are leaving civilization behind and entering the world of the Grizzly and Mountain Lion and Wolf. We arrived in late twilight and pitched our tents in darkness in a thickly wooded campground in West Glacier.

In the morning, we were disheartened to discover that the Going to the Sun Road, one of the great engineering feats in American history, would be closed, due to snow and ice, and so we drove fifty miles around the park’s southeastern edge to East Glacier. We intended to run a beautiful ten miles on soft, level single track, but each of us felt exhausted, and so we decided to give ourselves a day’s rest. 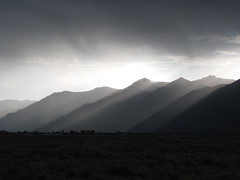 We pitched camp early on the banks of Saint Mary Lake and at the foot of one of Glacier’s towering, snow-capped pinnacles. We enjoyed our rest thoroughly, and caught up on much needed sleep and reading.

Russell is reading Empire of Liberty, by David Reynolds. I highly recommend this wonderful, brief history of the United States. Ry is reading Jack Kerouac’s The Road, as well as Stephen Ambrose’s extensive history of Lewis & Clark, entitled Undaunted Courage. I am reading Robert Pirsig’s Zen and the Art of Motorcycle Maintenance.

Yesterday morning, we woke early to run, before driving north to Calgary, Alberta. Our run took us over hardened single-track, scattered with bear scat, and across alpine meadows, as 10,000 foot peaks rose in front of us. We were without bear spray, so we yelled and clapped our hands as we rounded blind turns, but apart from a few raptors and ground squirrels, we did not come into contact with any wildlife.

Somewhat ironically, we spent our last day in the United States celebrating Canada Day in Bozeman, MT, before driving into Alberta and on to Calgary, where we would spend the 4th of July. Calgary is a city with a dueling identity, influenced simultaneously by the Great Plains and the Rocky Mountains. 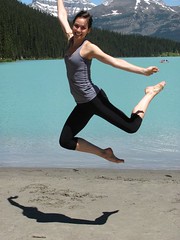 We spent a day in Calgary interviewing students at the University of Calgary, who impressed us with for their receptivity to our survey. Calgary seems an active city, and most of the students we spoke with were adamant that their daily outdoor exercise or activity was critical to their day-to-day functionality. We agree!

We left Calgary and drove west to Banff National Park. Nestled in the heart of the Canadian Rockies, Banff, and its iconic glacial lakes (known for their shockingly turquoise waters) is overwhelmingly beautiful. We camped and ran in the park, and gawked at Lake Louise and Moraine Lake.

We spent yesterday and today driving west through the Rockies, then British Columbia’s wine country, and finally across the Sierra Nevadas to reach Vancouver this afternoon. We will spend two days and three nights here to interview students, assess and compile our growing data, and experience one of North America’s most outdoor-oriented cities.