Rock/Creek co-owner Dawson Wheeler and merchandiser Josh Legg are bicycling ~350 miles from Steamboat, Colorado to Park City, Utah over the next 4 days, a ride organized by SmartWool to coincide with the Outdoor Retailer show in Salt Lake City. Below, Dawson checks in after days two and three of the ride! 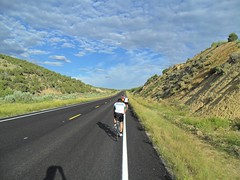 Day two was a huge day, riding out of Meeker and into Vernal, Colorado. The group rolled at at 6am, and the first 23 miles were as beautiful as can be: open farmlands, rolling hills and streams. The group stayed together and rode a very moderate pace to the first aid station.

As we were leaving the aid station, I had to pull over for a “natural break” and then found myself alone and riding into a headwind. I had hoped Josh would notice, but he was swept up in the group, so the next 20 odd miles were tough for me riding alone. I never caught the group until the second aid station, which was on a beautiful lake in the Middle of Nowhere, CO.

The groups now re-formed, Josh and I went into the second group… but again a natural break called, so Josh and I became an army of two riding toward Dinosaur National Park. That worked out well, giving us a chance to take a few pictures and enjoy the country. In Dinosaur, we packed up for the last 33 miles. We were now riding on a very busy highway with lots of big trucks coming and going from the oil fields in this area.

About 9 miles out of Dinosaur, we were cruising along at about 23 miles a hour when Russ Raffa hit a rock, launching him off of his bike and into the middle of the highway. Everyone behind him managed to stay up, but brakes and bikes were going everywhere. 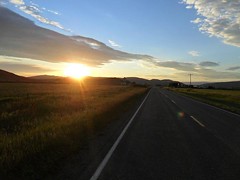 No trucks were on the road, so Russ just got rashed. The road was tar and pea gravel, which must have hurt! We called support, got the med kit, patched him up and off we went.

At the 100 mile mark, we stopped for water and a break off the saddle. As we left town, Josh blew a tire and my co2 nozzle did not work; “what are we going to do now?” We ended up stuck on the side of the road for 30 minutes, until another rider happened by and helped us out. The last 9 miles were very hard: bad road, lots of big trucks and we were shot. We road into town in silence. There was no need to state the obvious; we were spent. 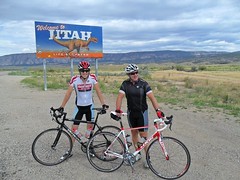 Day 3 was a welcome shorter day. We are now riding toward the big mountains, which are visible in the distance, snow capping some of the peaks. It rained all last night so the roads were wet. The riding was rolling, and uphill as we continue to head for tomorrow’s huge climb.

No one was in a hurry, which I was very excited about. We finished the day at a tiny store, where we had a beer and ice cream. Two more miles to the hunting lodge, a short dirt road and we’d arrived for the night. One more day to go!