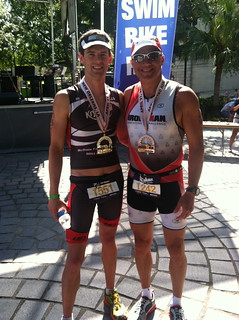 This last weekend John O’Brien and I competed in the Ochsner Ironman 70.3 New Orleans. The race venue was moved this year due to wind that cancelled the swim in the past. The swim and transition now takes place in South Shore Harbor; it’s not any cleaner but at least its protected.

It was a windy day, 10-14 miles per hour. But fairly cool temps, the high being about 70. We both had no expectations going into the race; it was the first triathlon of the season for us. I had not raced a triathlon since last September, having to take some time off due to a sprained ankle and injured achilles tendon. We both had a great day.

My swim was fine; I came out of the water sixth in my group with a time of 33:06. The bike was windy and I played it conservatively with a time of 2:34:24. I do not have much of an advantage on a flat windy course. Where are the hills?

I came out at 4:43:29, winning my age group and 97th overall with the pros. Johnny came in 4th in his age group and we both qualified again for the Ironman 70.3 World Championships. It was a great trip down to the Big Easy.

I was still hot from the Blackjack tables in Vegas — more than quadrupled my money at Harrah’s. Yea buddy!