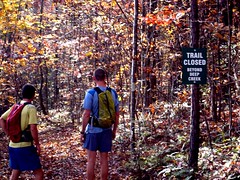 Chalk one up for the good guys! Late last week the Tennessee Court of Appeals struck down a decision by a lower court that would continue to allow a unobstructed access to minerals on lands owned by the State.
This is great news for hikers, backpackers and land conservationists in the area. Those who have been on the Soddy Daisy segment of the Cumberland trail have seen the destruction that these unfettered mining practices can do.
The full story behind this case is a little confusing, as is normally the case when mining rights come into question. To simplify, Tennessee law states that land rights are separated into two different categories; surface and mineral. Surface rights include the right to harvest trees from the land and the right to develop public accessible trail systems. Mineral rights include the right to mine minerals below the surface. Certainly there is an inherent conflict. How does the owner of the mineral rights get to their precious minerals without disrupting the surface? At what point does accessing mineral rights violate the owner of the surface rights?
This conflict was the source of a case that the State of Tennessee brought against a Florida based mining company in 2007. The State claimed that the owner of the mineral rights, Lahiere/Hill Partnership, violated the State’s surface rights when they destroyed 70 to 100 yards of the Cumberland Trail while harvesting limestone. The State of Tennessee promptly filed suit. The case was first heard in the Hamilton County court system in 2007. The initial ruling by Chancellor Frank Brown allowed mining on public lands to continue. The state appealed and the case moved to the higher Appeals Court. Last wednesday, the Appeals Court made the decision to send the ruling back to the lower court on the grounds that the original court ruling misclassified stone as a mineral. Based on precedent setting documents and cases, Tennessee minerals include coal, iron, oil, gas, and precious metals. The classification does not include stone.
The ruling certainly doesn’t solve all the issue related to strip mining on the Cumberland, but it is a step in the right direction.
Both
Nashville’s Tennessen and Chattanooga’s Times Free Press have articles on the case.
A similar issue has arisen on the federal level. Currently mining on federal lands, such as in national forests, is governed by laws that were written in 1872. These laws state that mining is the best use of land and allows mining companies full access to precious metals without having to pay royalties on the materials that they remove. It has essentially been a free ride for mining companies for over 130 years. The House of Representatives passed a bill that would update the antiquated laws. Now it is up to the Senate to agree on an update before the bill is signed by the President. More information on the modernization of the 1872 Mining Laws can be found in a previous blog post.
It is vital that we tell our Senators how important it is that we protect our lands from undue destruction of our public lands. We must show that our voices are stronger than the millions of lobbying dollars spent by private mining interests. Senator Bob Corker is on the Energy and Natural Resources Committee. It is this committee that is assigned with putting together a bill that will be presented to the Senate floor. Please contact Sen. Corker and express how important it is to protect our lands.