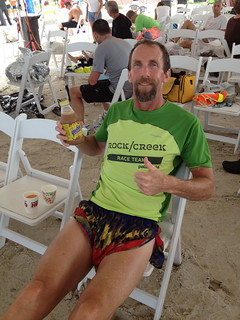 I don’t particularly like running in hot sunny weather. My body absolutely abhors it. Nor am I a fan of running on pavement. I was reminded of both these truths for over 27 hours while running my inaugural 100-mile race, the “Keys 100”.

I’d been mulling and floating the idea of a 100-mile run for some time and eventually established some criteria by which to choose one. First I wanted a point to point race. Secondly it had to be somewhere with pre/post race vacation appeal. I ultimately had two options, Ohio in August or the Florida Keys in May. Yeah… I thought the same thing. Cleveland, Ohio just does not scream “vacation destination”.

I really wasn’t sure how to train or get ready for the distance or heat so I spoke to a number of other successful 100-mile finishers. While there were no words of wisdom to deal with the heat, there was some consensus regarding the distance. Run long as often as you can, practice walking, do some night runs and most importantly… slow down.

In training I did reasonably well on the first suggestion, did some speed walking/hiking, made night runs for beer/wine/liquor when needed and really did make an effort to turn the tempo down. Race day came much sooner than I anticipated and there were mixed results from my training regime.

Lori (my significant other) and I spent 3 lovely days lounging on Captiva & Sanibel Island prior to the race, ostensibly to get acclimated to the FL heat I was confident the race would provide. Unfortunately, most of the sun and heat were absent while there, as it was mostly cloudy and rainy.

All that changed Friday on our way to Key Largo for the race packet pick up and race check-in. We arrived to blister-inducing sun, mid 80’s with matching humidity. I got dehydrated and sunburned walking the block from our hotel to the hotel two blocks down, where my race number was waiting.

The race runs from mile marker 100 in Key Largo down U.S. Highway 1 to mile marker 0 in Key West. As you can imagine, race literature was full of references to the bridges (119 as I recall) you would cross including one that is 7 miles long. With the Atlantic Ocean on one side and Florida Bay on the other we were assured to have beautifully colored water and abundant wildlife to enjoy. Cool I thought, the view and scenery would be terrific.

The race started promptly at 6:10am and I along with about 150 other individual competitors (there is also a relay division and 50 Mile version) trot down the walk/bike path heading south. After only a few miles at a very comfortable pace I realize I am already soaked in sweat and I know it’s going to be a real struggle for me to stay cool and hydrated. We alternately run on a wide asphalt/concrete path or the shoulder of the road for the entire distance. Almost all of it has a sharp camber sloping to from right to left. Aid stations are every 10 miles and there is *supposed to be a cooler of ice at the 5 miles between them. (*Last year several were stolen) In the interest of staying hydrated and alive, Lori crewed for me along the way since I knew I will not be able to carry enough hydration to make it from one aid station to the next. Little did I realize beforehand how critical this would be. 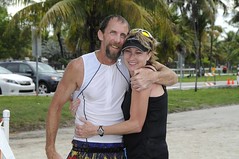 The rain started 2-3 hours in and continued for another 4-5 hours or so. And I mean rain. Sheets of it. (As an added bonus I had a near-death experience with a lightning strike to a tree immediately adjacent to me) While the rain does keep the temperature down a bit (not much really) it makes the skin on your feet melt. When it finally stopped and I changed into dry socks and shoes my feet had the look and texture of cottage cheese.

With the rain and cloud cover now gone the sun and humidity are nearly unbearable. I do have the occasional distractions as I note 3 snakes that slither across the path in front of me, multiple giant iguanas, a large sea turtle, herds of evasive crabs, several sting rays, multiple porpoises and a school of fish, each of which is the size of a surfboard. That’s about all the wildlife I would see and recognize.

Marathon Key and the halfway point soon followed and it was nice to be on the downhill side of the race. Unfortunately it’s soon followed by the 7 mile bridge. Oddly enough, the elevation change and flatness of the bridge surface are a welcome change. But that’s about it. In a weird way, the traffic flying by your shoulder at well above the posted limit is a great distraction to the never-ending bridge that extends off into the horizon. Once over to the other side, I never again look forward to another bridge crossing. They have become my enemy. Night is now approaching.

The sun sets just as I cross another bridge but cloud cover keeps me from seeing the famed “green flash”. The absence of the sun is welcome and my spirits are buoyed but unfortunately there is very little change in the ambient temperature and the humidity seems to increase. In the darkness, my headlamp illuminates all sizes of eyes in the swamp and trees and I pray that I don’t seem smaller to them than I am because at this point I could not outrun much of anything. I run well until about 1:30 when I’m suddenly slammed by the trifecta. The camber has taken a real toll on my left ankle, there is a monster of a thunderstorm approaching and despite the heat I suddenly feel cold and my skin is clammy. I bail to the car. For 3 hours. 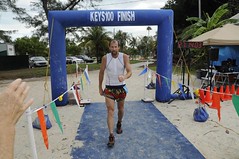 At 4am I am out and once again headed south toward mile marker 0 in what is now just a drizzling rain, the lightning far off in the distance. I had been told by a running companion earlier in the race that the 80-mile mark is half way (see also marathon mile 20) and he was seemingly correct.

The last 20 miles comprised 40% of my total race time. And it felt it. I was having extreme difficulty regulating my body temperature, particularly in the last 5 miles and genuinely wondered if I could make it to the finish.

Lori had driven ahead to the finish from our last meeting at mile marker 3 and ran with me for the last half a mile to the finish. Her smiling joyful face and enthusiasm really carried me to the finish line. I did not appreciate the mental focus it had taken to get to this point until I physically crossed the timing strip and was handed my finishers belt buckle. My emotions then poured out of me and streamed down my face. The next 10 minutes were surreal for me, and Lori. She deserves nearly equal credit for her crewing efforts to get me to this conclusion. I would not have been a finisher without her support.

By minute 11 I was downing cold beers (after a few ice cold Yoo-hoos, of course) and looking forward to a real meal, a swimming pool in which to relax and stretch and then take a well deserved nap. All of which occurred shortly thereafter. 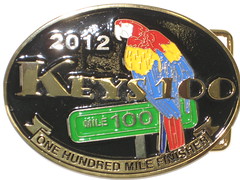 Key West travel tip: For craft beer and wine, go to “Krawl” at 506 Southard St. Talk to “Patrick”. I guarantee you will not be disappointed.

~ Sheridan Ames
“Watch the traffic, the light will never hit you”