“If you hang around me long enough I will get you to run an ultra!”

Krissy Moehl grew up in Bow, Washington and participated in every sport and activity the days would allow. “Growing up my Mom had my sister and me in everything, including tap, ballet, bowling lessons, Girl Scouts and horseback riding. I had the opportunity to try a lot of different activities.” She enjoyed cross-country, soccer, track, volleyball and basketball throughout her schooling and really focused on running when she walked on to the cross-country and track teams at the University of Washington. “I learned many valuable lessons from the UW coaches and team members: training techniques, body image and discipline. The most important lesson though came from my time abroad.”

In her junior year of college Krissy studied in Ecuador for five and half months. The group of students stayed with families and learned about the challenges and exploitations of the third world country. Picking up a second language, Spanish, and a better appreciation for culture and a more challenging life she also took away a more independent approach to running. It took being away from what had been the norm of so many years for Krissy to learn that running long distances was something she needed in her daily life and that she didn’t need a coach to tell her when or how to do it.

Upon returning to the states and Seattle after her time abroad she worked at the Seattle Running Company while finishing school. Under the pressure and influence of co-workers Scott McCoubrey and Scott Jurek she finally joined them for a trail run in the winter of 2000. “I finally found a type of running that fit. I’ve always loved running and enjoyed the training, but being on the trails, sharing time with like-minded individuals, exploring beautiful places and sharing in such a niche community I finally felt like I’d found a sense of home in running, a completeness.” In nearly ten years of Ultrarunning Krissy has built a resume of over 74 finishes with 42 female wins. In a sport that is geared towards an older crowd (average age at Hardrock 2007 was 47 years) starting in the sport at 21 Krissy was on the younger side. Now as the sport grows, more and more young runners are trying their legs at the longer distances.

“Running has taken me all over the world, has helped define me as a person, has led me to employment opportunities and connected me with life long friends. I have learned a lot from many years of running, and it seems the longer I’m out there the more life makes sense. I find a sense of peace, balance and self while running. I find strength and feel more in touch with self and surroundings. I like to say there aren’t many ‘issues’ that a long run can’t solve.”

I keep a Blog to track training and racing highlights and my website is: http://web.mac.com/krissymoehl “In addition to my own running I enjoy helping friends in their running endeavors, lending coaching advice when appropriate. I am the race director for the Chuckanut 50K, an event in March that takes place in Bellingham, Washington – my backyard growing up. I work in the outdoor industry and am thankful to be surrounded by companies and people that thrive on playing and protecting our natural playgrounds.”

“There isn’t an issue a long run can’t solve;

sometimes the run just has to be a little longer.” 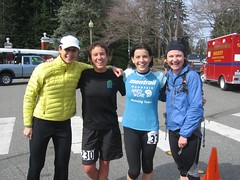 The Pacific Northwest offers such great access to beautiful terrain, I feel lucky to have such an amazing playground. I love weaving through the trees, being challenged by the climbs and technical terrain that our rooty trail systems have to offer. I also love high alpine terrain, and when choosing races and travel adventures, the big mountains definitely call.

“Doing the little things in my life to reduce my footprint on the Earth is the promise I make each day. Using canvas bags when grocery shopping, supporting local businesses and businesses with an environmental focus, taking my own cup to the coffee shop and trying to make other people understand the importance of doing the little things.“

On a larger scale, the race that I put on [the Chuckanut 50k] does not provide paper cups and insists people carry bottles. I take pride that the race keeps trails clean and I work with the local running groups for trail maintenance.

In 2010 I hope to qualify for the women’s 100km team. I look forward to racing the Miwok 100k in May, pacing friends at Western States, June, and Hardrock, July, and teaming up with Vasque teammate Bryan Dayton at the Transrockies, August. The fall will depend on 100km team qualification and the opportunity to race overseas in Chile, Japan and possibly China.

I ran the Grand Slam of Ultrarunning which consists of the four oldest 100 mile races in the states: Western States 100 (June 25), Vermont 100 (July 16), Leadville 100 (August 20) and Wasatch Front 100 (September 10). In finishing it at the age of 27, I became the youngest female finisher and currently hold the second fastest cumulative time for women.

amidst ultraracing I tried my hand at light and fast backpacking. I joined Andrew Skurka for a two-week trip on the Colorado Trail. We averaged 32 miles a day for just over 13 days. We set up three re-stock points along the way and never carried more that fifteen pounds. The trail is roughly 480 miles and travels from Denver to Durango through some of the most beautiful wilderness areas.

I put HURT and Hardrock, two of the hardest 100-mile races, on my schedule. Both races proved challenging, were learning experiences and were big successes.

I took a fall on the ice on an easy morning run and tore my left calf muscle, putting a hold on early season training. I found my way back into the racing season late fall and enjoyed the inaugural Grindstone 100 mile race in Virginia.

was anchored with two tough races, the Western States 100 in June and the Ultra Tour du Mont Blanc 166km eight weeks later in August. I learned a bit about my racing style at Western States and was able to apply that information to a solid performance in France.